Julia Taylor is the Girls’ Lacrosse Player of the Year 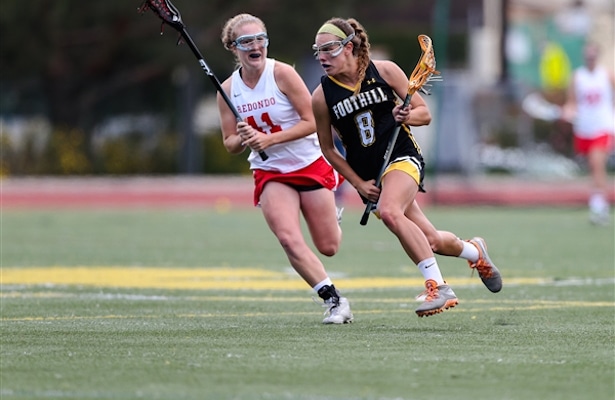 Before the 2015 season even began, Julia Taylor had accomplished pretty much everything most young players dream of accomplishing when they launch their high school careers.  She was already a two-time All-Sunset League honoree. She earned All-County Second Team honors as a sophomore. Following a 65-point (46 goals, 19 assists) junior campaign, Taylor was named an All-American.  Then last November Julia signed her National Letter of Intent to play at the University of Oregon. She also earned scholar athlete distinction three years in a row.

With a resume like that, it is not surprising that expectations were high for Taylor entering the 2015 season. Never one to rest on her laurels, Taylor not only met those high expectations, she crushed them. Maybe she felt slighted at being left off the All-County team her junior year.  Maybe it was a burning desire to cap her high school career with a Southern Section Championship.  Maybe it was just a self-motivated  internal drive to continuously improve.  Maybe it was all of the above. Whatever it was, Taylor brought her game to a whole new level in 2015.

[spacer height=”10px”]Despite being face-guarded virtually every game while playing a schedule that LaxPower.com ranks as the second toughest in the Southern Section, Julia Taylor nearly doubled her output in every statistical category this year.  She put up 121 points this year compared to 65 her junior season.  She increased her goals scored from 46 to 90, and her assists from 19 to 31. Taylor picked up 97 groundballs, 45 more than last year, and recorded 21 takeaways.  Her marquee game came against Oak Park, the top ranked team in Los Angeles at the time, when she found twine 11 times.  Taylor was named Most Outstanding Player of the OC Division Championship game, and most important to her, Julia Taylor will enter the University of Oregon as a Southern Section Champion.

Congratulations to Julia Taylor, the US Lacrosse Orange County Chapter Player of the Year. Keep reading to enjoy some Q & A with Julia.

How did it feel to close out your career with a Southern Section championship?
Winning Southern Section was something I’ve wanted since freshman year. Being a captain this season alongside Lauren Bernardy and Emily Coffee I knew we had an opportunity to push the team to finish out the season and never let up. The fact that mid season we struggled, but picked it right back up made our win that much sweeter.

What do you think the secret to the team’s success was this year?
I really think we just had a special group of girls. Everyone on the team felt this could be our year and it made everyone that much more willing to push themselves. I think our coaches, Kaylee Navarrete and Kate Hick helped give us an edge with extra conditioning and attention to the fundamentals.

How long have you been playing lacrosse?  Any other great lacrosse memories?
I’ve been playing lacrosse for 7 years since I started in 6th grade. In middle school lacrosse was just another fun thing to do, but making varsity freshman year was when I knew it was something I wanted to work at and that was when I really started having fun with the sport. I think I learned a lot freshman year from the older girls and I wouldn’t trade that season for anything.

what are your thoughts as your four years at foothill come to an end?
I’m going to miss being a part of the foothill lacrosse program so much. I’ve met so many amazing people through it and I’m so thankful for that. It’s cliche, but it’s all so bittersweet. Over the last four years I’ve learned a lot from different players and coaches at foothill and on club teams and I just hope I can make them all proud next season when I’m playing at Oregon. There’s been a lot to love about my high school career but I’m so excited for what’s to come.

What is something funny you remember?
Just bus rides with the team.

What advice would you give to the young girls coming up?
Take chances in high school on the field because it is the perfect time to make mistakes with minimal consequences.

What kind of things did you experience playing back east?
The girls are fast and smart and I can’t wait for the west coast to catch up.