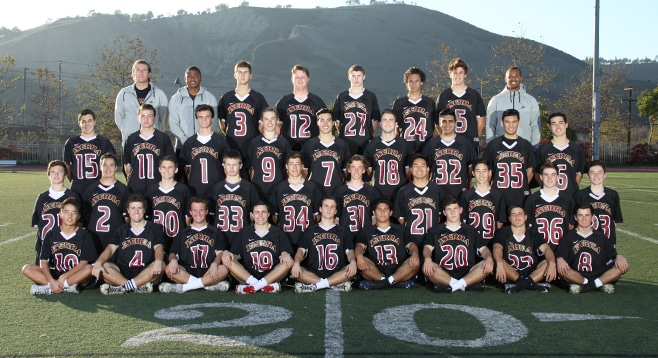 A wide-open Logan Olmsted collected a cross-crease pass from Yuta Murata with 36.6 seconds left on the clock, and drilled a shot past Santa Margarita goalie Max Vought to give visiting JSerra a 9-8 victory over Santa Margarita.  Although tied at several junctures during the game, it was the first time all night the Lions held the lead outright.  Michael Senecal put the Eagles on the board first when he finished a pinpoint pass from Hayden Ruiz. Three goals from Nico Houser, all of the highlight variety, and one apiece from Drew Webster and Zach Taylor gave the Eagles a 6-3 lead at halftime.  Two goals from James Yanes and one from Jake Schleppy accounted for the JSerra first half scoring. Mitch Kingsley and Brendan Lynch picked up assists on the Yanes goals.

In a pattern similar to their Foothill game, the Lions came out of intermission with a renewed energy and started firing away.  While a staunch Santa Margarita was making it difficult for the rest of the JSerra offense to find good shot, Yanes was having his way particularly from X.  Yanes sandwiched two third quarter goals around Schleppy’s second of the night to tie the game at 6-6 heading into the final twelve minutes.  Senecal put the Eagles up by when he buried a 10 yard worm burner in the lower left corner to make it 7-6.  Kingsley knotted the game again when reached for the sky to pull in an alley oop pass from Murata and finished with a quick stick.  Wes Schuler scored his only goal of the night when quick sticked a feed from Ruiz before Yanes knotted the score again, this time at 8-8.   The Yanes goal came on a manup situation with about four minutes left, that was setup when Yanes broke up a Santa Margarita clearing attempt and drew a slash.

Then with 35 seconds left Murata setup Olmsted for the game winner.  The Eagles won the ensuing and faceoff and called timeout.  Logan Dochterman cleared from midfield after the timeout, circled the cage, and found Andrew Kofoed open on the crease for one last chance, but Kofoed did not convert and the game ended at 9-8, JSerra.