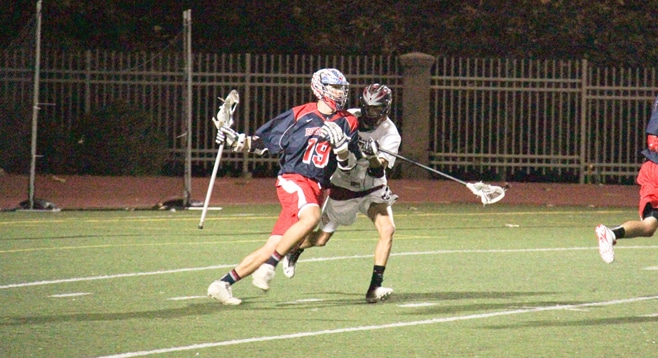 The final score may have been 11-7 but Beckman came closer than the score would indicate to pulling the upset.

Two top 10 teams gave the fans at JSerra Catholic High School a good show Monday night. There were two lead changes and plenty of opportunities for both teams to pull away.

The physicality of this game was evident from the opening whistle. Beckman’s first possession resulted in a triple team hack fest that remarkably did not result in a penalty for JSerra. On the immediate possessions the refs had a change of heart and rewarded the Patriots with two man-up situations that they failed to convert.

Tevor Keene didn’t need a man up opportunity to score the first of his two goals of the first quarter to put Beckman up 1-0. Gage Manning finished a feed from Mitch Kingsley to finally put the Lions on the board eight minutes into the first.

With Beckman up 3-1 going into the second the Lion’s defense started pressing out and brought remarkable pressure. Beckman didn’t play scared and countered by dodging into the hands of the J Serra’s lumber laying defensemen instead of running away. Nick White (Beckman) kept Beckman’s lead at two after Kingsley beat his man at X to finish topside.

J Serra cleaned up their clearing game and settled in an offensive groove. James Yanes, Logan Olmsted (2 goals on the night), and Kingsley would score to finish the second quarter strong with JSerra up, 6-4.

Beckman mounted a short comeback with two goals from Alex Malmund tying the game at sixes but JSerra’s playing experience would prove too much as they pulled away in the fourth quarter thanks to four goals from Brendan Lynch to finish off a 11-7 win.

J Serra’s LSM Scotty Barger (Towson) was all over the field and played effectively extended throughout the game. Tucker Guyot (Jacksonville) also adjusted well after being beat a few times in the first half. During the second half he effectively shut down Keene and limited the Beckman offense.

Beckman’s Matt Allen had key saves that gave Beckman the momentum to keep this game close. Beckman seemed like a team that has a huge potential to improve and be an upset threat all year.