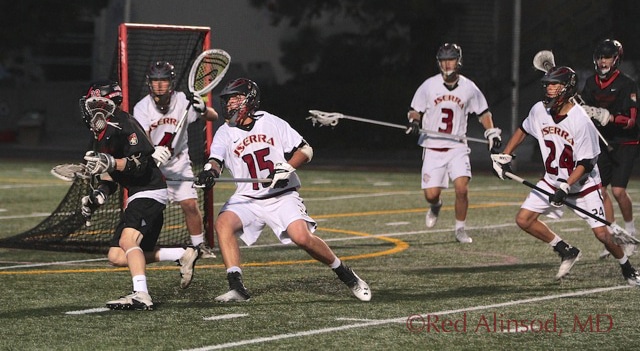 For the second time in 2 days, JSerra braved the rush hour traffic in search of competition north of Orange County. On Thursday, the Lions emerged victorious from a confrontation with last year’s North Division (LA and Ventura Counties) runnerup, Palos Verdes. Friday night the stakes were raised as JSerra faced off against the defending North Division champions, Harvard-Westlake. It was the first-ever meeting of the Lions and the Wolverines of Harvard-Westlake. The daunting drive to Studio City during Friday rush hour did not prevent the Lions from coming out on top with an 11-9 road win.

Putting the first goal on the board for JSerra was Yuta Murata (1 goal, 1 assist), followed by goals from James Yanes (4 goals) on a nice feed from defensive midfielder Jackson Russell (1 assist), Logan Olmstead, (1 goal) and Brenden Lynch (1 goal). The Wolverines tried to answer with two quick goals but the 1st quarter ended at 5-2 after Murata found Mitch Kingsley (3 goals, 2 assists) for a goal with 1 second on the clock.

The second and third quarters were a battle of wills for both teams. Kingsley fed Yanes twice in the second quarter while the entire JSerra defensive unit held the Wolverines to one goal. Anchored by keeper Jake Henigman, defensemen Tucker Guyot and Russell were an irritant to the opposition by gaining possession on the defensive side of the field. LSM Scott Barger (1 assist) found Gage Manning (1 goal, 1 assist) quickly in the 3rd quarter followed by two more goals from JSerra, while Harvard Westlake added three more.

Heading into the 4th quarter with a 10-6 lead, Kingsley added one more but the Wolverines would not stop and put up 3 unanswered goals. With 5:38 left on the game clock, JSerra was hoping the clock would speed up to run down some questionable penalties, while the Wolverines were trying to slow it down. JSerra’s defense combined for 13 caused turnovers, led by Tucker Guyot’s 5. Henigman was solid between the pipes with 8 saves.

The win makes the OC an unofficial 7-1 over outside competition in this young season. JSerra and San Clemente have both beaten Palos Verdes, Foothill and Tesoro have beaten Oak Park, Foothill beat De La Salle last night, and CIF newcomer Edison earned one of their three victories over Mira Costa.

The Lions travel North again on Saturday to face Agoura Hills in the inaugural match of the two teams.