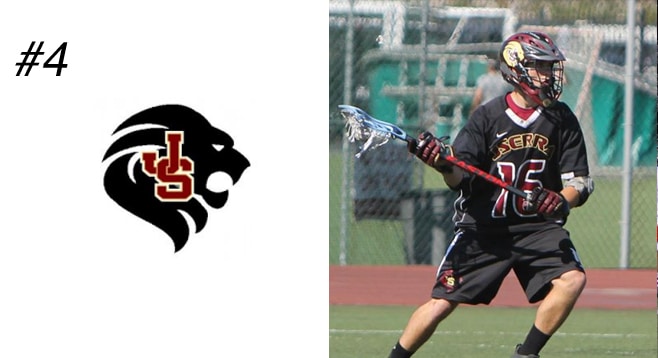 In their final road trip game of their Spring Break, the Pride of JSerra came out on top with an 11-7 win at the end of their inaugural match against the Chargers of Agoura Hills. Midfielder Jackson Russell (1 goal) notched an unassisted goal for the Lions followed by quick goals by midfielders Logan Olmsted (1 goal, 1 assist) and Steve Inman ( 1 goal). In fairly quick succession attackman Mitch Kingsley (4 goals, 2 assists) put two on the board, while James Yanes (2 goals) got into the action with one of his signature man-up goals after a feed from Olmsted ending the first quarter with a 6-1 JSerra lead.

The second quarter of the matchup brought a defensive matchup of both teams keeping the combined goals to only three for the Lions and the Chargers. Kingsley converted a ride to a quick left-handed goal while midfielder Brenden Lynch (2 goals) found the net with a nice feed from Olmsted.

JSerra defensemen kept clearing the ball with ease in the third and fourth quarters after goal keeper Jake Henigman (10 saves) kept gaining possession with six saves in the half. The Chargers, however, were presented with five EMOs in the final half, of which they were able to convert on three of them. JSerra put three more on the board with the final goal created by a nice feed from Yuta Murata to Gage Manning (1 goal). Marata also put in another impressive performance with two assists.

Having conquered the North with three straight wins over Spring Break, JSerra looks to the South. The Lions look forward to staying in Orange County for their next home game against Duke-bound Jake Seau and the Bishop School of La Jolla on Wednesday at 7 p.m.