JSerra Comes Out on Top of OC-LA Matchup 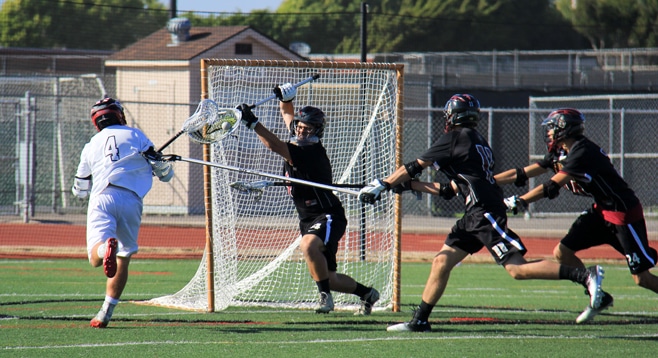 JSerra started strong and ended strong to pull off a convincing win over one of the top teams in LA, Palos Verdes, 13-8. Maybe perennial Los Angeles County powerhouse Palos Verdes decided this is the year to go big or go home. While many top teams like to ease their way into the season with what amounts to a warmup game, the Sea Kings chose to open their season with some top notch Orange County teams. Following a season-opening loss to San Clemente on Saturday, Palos Verdes hosted JSerra, another Orange County Top 10 team. After yesterday’s game, the team from LA might rethink scheduling OC teams in the future.

JSerra came out looking to make a statement. The Lions were fresh after a week off between games and it showed from the opening whistle as Brenden Lynch opened up the scoring in the first quarter. Mitch Kingsley and Emerson Roth jumped aboard the scoring train as goalie Jake Henigman played lights out ending the first quarter up 3-0.

The second quarter was slightly less dominant by the Lions but equally well played. Lynch got 2/3 of the way to his eventual hat trick, Gage Manning contributed a goal and Jimmy Yanes scored the first of his three with only a few seconds left in the half. Palos Verdes put in three to keep the Lion’s lead in check, 6-3 at half.

The Lions seemingly had all the momentum going into the second half but the Sea Kings had other ideas, and put in four in a row to take the lead, 7-6. During this run JSerra definitely didn’t get any help from the officials. They drew the short straw when they received what should have been an unnecessary roughness on what should have been PV, and were getting no sympathy from the refs on few obvious hacks. JSerra started to slow things down and returned the usual defensive tactics of sliding to hold PV to their seven as they put in five of their own to go up 11-7. Henigman made a ton of key saves during this comeback and Lynch and Yanes finished their hat tricks.

1. Jake Henigman: He was in the zone to the very end of the game making fantastic saves with minutes left and up five goals. 15 saves for as many open shots as the Sea Kings got is an impressive stat.

3. Tucker Guyot: Guyot played lock-down defense and even started some fast breaks to gain back the momentum after the defense let in four goals in a row at the beginning of the second half.