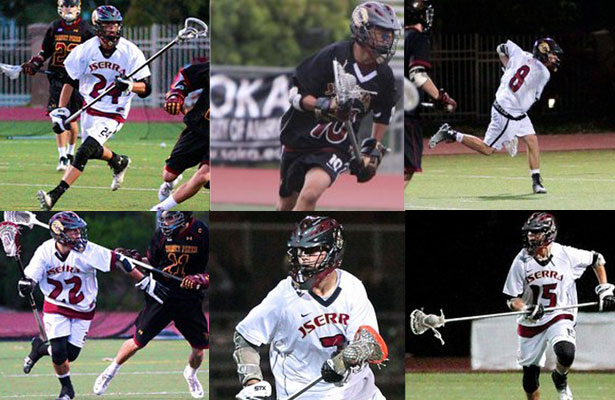 No. 4 JSerra Catholic High School clinched its second consecutive Trinity League crown by beating No. 5 Santa Margarita Catholic High School 12-11 on Thursday night.  Much like Wednesday night’s game between No. 2 Corona del Mar  and No. 3 St.  Margaret’s this game started out slowly, went back and forth from beginning to end, and was not decided until the closing seconds.

There were too many would be heroes to count.   Andrew Kofoed (Notre Dame de Namur)  played like a hero with six goals.   Cayson Fincher and Eric Rubak, getting it down on both ends of the field played like heroes.  Logan Olmsted played like a hero scoring  the eventual game winner with two minutes left to play.  But this game really came down to Austin Shackleford tying up Rubak on the final faceoff with 16 seconds left to deny the Eagles one last possession.

Tied at fours midway through the second quarter, there were no less than four lead changes after that, and the game was tied 8-8 as the third quarter ended.  Three unanswered goals gave the Lions an 11-8 lead with five minutes to play, and Olmsted’s goal gave them a 12-9 lead with two minutes to play.  It’s hard to keep a good Eagle down though, and goals by Nico Houser (to complete his hat trick) at 1:34 and Logan Dochterman at 0:16 left  had Santa Margarita thinking overtime until Shackleford took care of business at the faceoff X.  Did somebody say rematch?