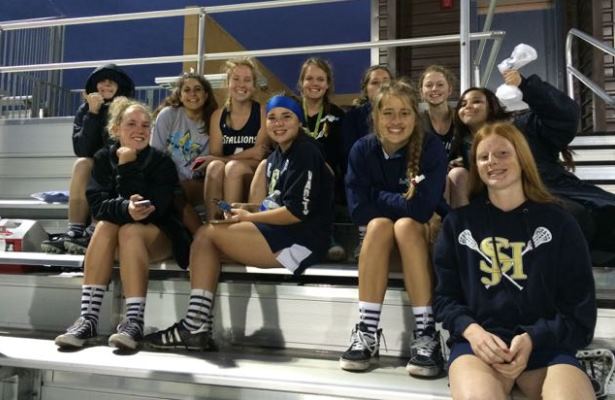 While many of us dread Tax Day, April 15 can’t come soon enough for Journey Fischbeck.  The San Juan Hills High School junior attack has been ineligible since Fall 2014, when she transferred from Capistrano Valley High School, a team the went undefeated during the regular season last year and made it to the Southern Division semi-finals.    That all changes on April 15, when the CIF sit-out period ends and Fischbeck steps back onto the field. It couldn’t come at a better time with San Juan Hills sitting 2-2 in the Sea View League.

Unable to help her team with a lacrosse stick in her hands, Fischbeck has done what great leaders do and found other ways to contribute to the cause.  During her sit-out period, Fischbeck exchanged her lacrosse for a whistle.   She’s been coaching on the sidelines during varsity games and player/coaching in practices helping first year coach Michael Welter install new plays and teach techniques.  “Coach Welter has been awesome allowing me to help the team in anyway I can.  We came up with the plan once we received the final decision from CIF that I would have to miss the first two-thirds of the season.”  Says Fischbeck.

2014 was a tough year for San Juan Hills girls’ lacrosse.  With a record of 1-13 under the former coaching staff, and only five returning starters, Fischbeck’s work ethic and winning attitude was exactly what Coach Welter needed to inspire and mentor the team. (They are currently 6-6 overall).  “Every player has embraced Journey and what she offers to the team, whether it’s at practice during a particular drill or constructive criticism during a game on what a fellow teammate could have done better, it’s all been a very positive experience for all of them”, says Welter.  “Even though Journey is anxious to play and loves working out at practice with the team, she’s dealt with the initial setback of not playing and turned the experience into a learning and growth process for her as well”.  Its been an uphill climb for Fischbeck as well.

In 2014 Fischbeck was tied with teammate and County MVP Riley Eggman (CVHS) for points in assists and goals (averaging 6 goals per game) when disaster struck twice.  First, in late March she suffered a blindside hit versus Dana Hills which sidelined her due to concussion.  Then, just a few weeks later, on April 3rd she was involved in a severe car accident, ironically enough before Capo would play San Juan Hills.  Due to the severity of the accident Fischbeck was sidelined with an ankle injury for the remainder of 2014 season.  Even though her season was cut short by injury,  Fischbeck was honored by her Capo team by receiving the Offensive Player of the Year and was selected to first team all league.

After rehabilitation Fischbeck continued on her quest to play in college and doubled down on her training with Nick Tintle (owner) at Athletes Choice in Rancho Santa Margarita. She also rejoined her National Club Team, the Pacific Falcons. Tintle had this to say about Fischbeck, “I am so proud of Journey fighting her way through my challenging training regimen and I know when she comes back to play she will ready to dominate”.  Since June 2014 Fischbeck’s routine included workouts at Athletes Choice 4-5 days a week, practice with her club team and San Juan, summer tournaments with the San Juan Phillies, running 10-15 miles per week and daily wall ball at 1,000 each.  Fischbeck played in several national tournaments with the Pacific Falcons and was selected to the OC US Lacrosse National team.  As if she isn’t busy enough, she also holds a  job at Lifetime Fitness as a Lifeguard and Swim Instructor and maintains a 3.85 grade point average.

Her comeback and hard work payed off as her dream of playing in college came true after receiving a call and scholarship offer on February 15th from the head coach of Mercyhurst University, PA.  Mercyhurst is an NCAA Division 2 Womens program and is currently ranked 5th in the country.  Fischbeck was the first of her class to receive an offer from the University.  “When I received a call from Coach Pilson I cried I was so happy.  I visited Mercyhurst in November and fell in love with the school.  Coach Pilson is such a great coach and the girls were very nice to me.”  With her scholarship Fischbeck will be accepted into the Tom Ridge School of Intelligence Studies and Information Sciences.  Her career goal is to work in the CIA specializing in forensics.

So here we are.  An incredible story about a 16 year old halfway through her high school career with her first game of the 2015 season this Wednesday April 15th when her eligibility is reinstated.  In talking to Journey you would never know how hard and from how far she’s fought to achieve so much in her young life.  To her she’s all about spending time with her team.  She lights up while talking about her San Juan teammates and the LAX Cult (A group she refers to as her closest friends from schools all over the county she’s acquired in all of her young years of playing lacrosse all over the country).  To her she just wants to be a good teammate and good friend.  When asked If its hard to play against her friends, she smiles and responds “No its the best part about playing lacrosse.  We’re pretty competitive but we have a great time. Playing in games against the Cult with my sisters at San Juan it’s the best of both worlds”.

When asked if she is excited to get back on the field this week, her response “I’m just so proud of my San Juan team and how far we’ve come.  We are so lucky to have coach Welter he’s passionate and patient with us.  We’re such a young team and we have a lot of work ahead of us”, When asked about her goals for the rest of the season, Fischbeck says “win and have fun”.