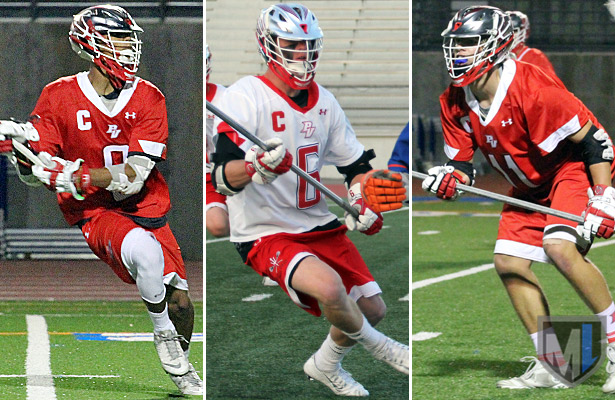 Jones, a four-year varsity player, is a defender and LSM who also finished fifth on the team in scoring with 35 points in 21 games (19g, 16a). Defensively, he was a one-man wrecking crew, finishing with 140 ground balls (7 per game) and 63 caused turnovers (3 per game). He also has been selected to play in the Under Armour All-America Game on July 2 at Towson University in Baltimore. He will play next year at Georgetown.

Smith, a versatile attack/middie who also played four varsity seasons for the Sea Kings, scored 39 goals and had 22 assists this season. He will play next year at NCAA D-III Stevenson.

Sharp, a three-year member of the PV varsity, anchored the Sea Kings’ back line, typically covering the opponents’ top attackman. He finished with 25 ground balls and 21 caused turnovers. He will play next year at Lafayette.

“I think the number of guys on that first team and POY going on to play D-I or D-III is the most impressive to me,” Palos Verdes coach Jimmy Borell said. “The Bay league has come a long way!”

Fourteen of the 25 players honored have committed to play lacrosse at NCAA colleges. Moreover, 11 of the 25 were named All-Bay League last year, and nine players are on the list for the third year in a row.

“Its amazing to see how many players are making a return visit to the All-Bay League team,” Peninsula coach Lane Jaffe said. “It’s some of these kids’ second and third time making all-league. A great senior class from the Bay.”

Peninsula and Mira Costa, which finished tied for second in the Bay League, each placed five players on the all-league lists. Redondo Union had two players recognized.

“I was really happy to see five of our guys recognized along with all of the great talent within our league,” said Mira Costa coach Aaron Karsh. The Mustangs played through a number of injuries this season and had players in and out of the lineup and sometimes playing out of position.