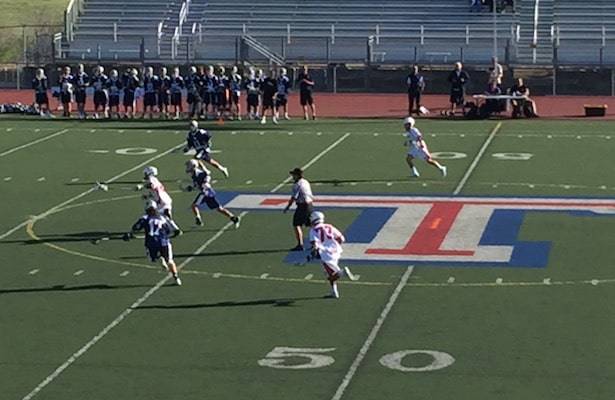 Tesoro Sophomore Jonathan Gibson (3g) scored two goals in the last two minutes of the game to complete his hat trick and give the Titans a 5-4 victory over South Coast League rival Trabuco Hills. The Titans did not hold a lead until Gibson put them up 5-4. The Titans saved their best for last, scoring two goals in the final minute of first half to tie the game and Gibson’s two goals at the end of the second half to win the game.

In the first quarter, both teams traded rushes and saves, but Trabuco’s offense kept pressing and was rewarded. The Mustangs’ Billy Barron (1a) passed to Jason Kauo (1g) early in the first to make it 1-0. Later, Holden Evans (1g) curled around the front of the goal and scored unassisted on a great effort to put the Mustangs up 2-0 after the first quarter.

Trabuco Hills kept up the pressure in the second quarter, pounding shot after shot at Tesoro’s goalie Ethan Patterson who made five big saves in a row to keep his team in the game. Not to be outdone, the Mustang’s Nick Wilson turned away numerous high percentage shots by the Titans. The defense for both teams held up until the very end when Tesoro’s Brendan Mariles went coast-to-coast and fed Brian Graves (1g) to put Tesoro on the board with about a minute left. But Tesoro wasn’t done. Jason Moreta (1a) made a great assist to Gibson for his first goal with only 27 seconds left before the half to knot the game at 2-2.

In the second half, Tesoro leapt out in front early with an unassisted goal by Cole Spooner (1g, 1a) which was matched by Harrison Evans of Trabuco Hills with his own unassisted goal after running straight through the Titan’s defense. The third was filled with sweet feeds, great shots and even more big saves but once again the teams were tied 3-3.

In the fourth the battle continued until Mustang Wyatt Koudelka snuck one past the Titan goalie to go up 4-3. The Titans didn’t fold and with two minutes left Marcus Huerta fed Gibson his second goal to knot the game once more at 4-4. Less than 20 seconds later, Cole Spooner gave Gibson an incredible feed putting the Titans on top for good.