Jonah Rinaldi is MaxLaxOC Boys’ Player of the Week 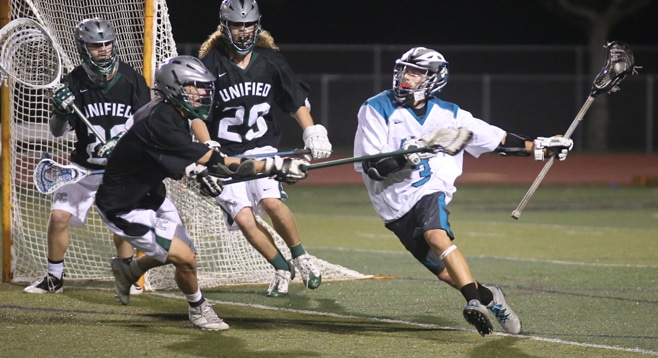 Jonah Rinaldi is the MaxLaxOC Player of the Week after he totaled 18 points this week to push Aliso Niguel to 6-1.

Rinaldi is a big reason why the Wolverines are off to a hot start this year at 6-1. His agility is as good as anyone’s in the county which lets him create his own shots. When teams start to slide early he sees the field with collegiate level vision to create scoring opportunities everywhere for the offense.

Rinaldi is one of those players that you never get tired of watching. He outworks defensemen on ground balls and takes advantage of every broken play opportunity. During last week’s two games, Rinaldi totaled 18 points (7G/2A and 5G/4A) and concurrently has grabbed the attention of coaches and players as an attackman who defenses have to gameplan to contain.

Coach Jenkins on Rinaldi and what he brings to the team. ” Jonah’s definitely one of our catalysts on offense. As far as what we want to do from the attack position, he’s the lead. The biggest thing about Jonah is that we’re starting to see him come full circle. Last year he played compliment to Mike Traub but he showed his intelligence by always being in the right place at the right time and on the end of plays. Now he’s the guy, and we’re seeing him grow his game even more every week. From starting the season thinking he has to go 1v2 or 3 all the time, now he’s realizing he doesn’t have to do as much work to make the defense move, and our offense is starting to hit on all cylinders because of it.”