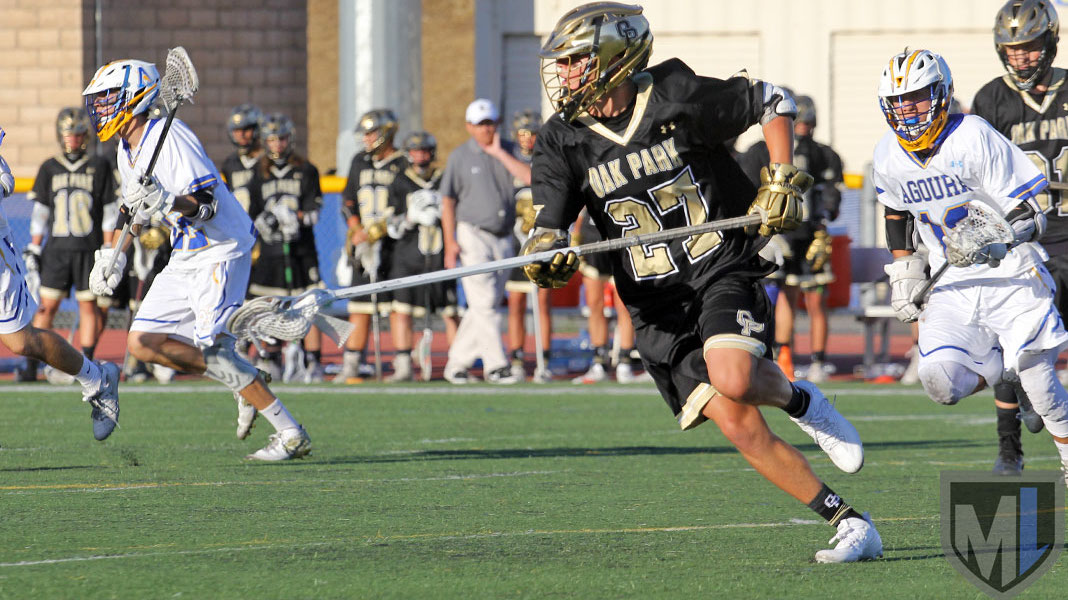 Joey Rosen, a Class of 2019 LSM who played the last two seasons at Oak Park before moving to Texas, announced this week he has committed to Jacksonville University.

In an email interview, Rosen said there were four factors that made Jacksonville the right choice.

“First, and most importantly, I want to receive a business degree from a small private school,” Rosen said. “JU has a 12:1 student to teacher ratio, with 74 percent of the classes under 20 students. Second, the lacrosse aspect. I loved the feel and energy that the coaches gave off. They made me feel as if I was at home right when I arrived to visit the campus. Third, was the the location of the school. I thought to myself, ‘Who gets the opportunity to play Division I lacrosse right by the beach?’ Fourth was that Coach [John] Galloway is not only the team USA goalie but plays in the MLL. I thought it would be awesome to play for a defensive-minded coach like him, since my position is LSM.”

As an Oak Park sophomore last spring, Rosen collected 54 ground balls in 18 games. The Eagles finished 15-5 after falling to Agoura 6-5 in the second round of the playoffs.

“Joey’s teammates and coaches were all very excited and thrilled to hear about his commitment to Jacksonville,” Oak Park coach Tarik Ergin said. “We all knew it was really a question of when, not if. He has an intense desire when it comes to lacrosse. Team that up with a hard-nosed work ethic, speed, stick skills, a natural athleticism and you’re bound to have success. I know I speak for my staff when I say we all really wish he were still wearing the golden helmet of OP.”

In August, though, Rosen’s family moved to Dallas, where he will play for Highland Park HS, winners of 10 Texas state championships at both Division I and Division II levels.

“Things at Highland Park are awesome,” Rosen said. “I truly believe that I fit in well. It’s the top program in Texas, and it’s an honor to be a part of something so special. We have some of the best talent in the country and the best coaches in the sport. My coaches at HP — Rich Moses, Nick Disimile, Austin Geisler and Dalton Jernigan — have already had a huge impact and made me a better player since I have come into the program. I can’t even imagine what I can turn into with their coaching smarts and experience.”

Texas also was the site of what Rosen said was the springboard for his recruitment last June. Per the new NCAA recruiting rules, though, it was another few months before things moved forward.

“My recruitment blew up this summer when I competed at Adrenaline’s [Western Prime] tournament at the Star in Frisco, Texas,” Rosen said. “Coach Galloway was in attendance and immediately reached out to me when the clock struck 12:01 a.m. my time on Sept. 1.”

Rosen, who has has played club ball for the LA Mavs, West Coast Starz, 212 Select and Chaos (Texas), said he also was recruited by Salisbury, Rutgers, Utah, Mercer and Wagner, but he chose Jacksonville for the reasons noted above, as well as a relationship with Jacksonville sophomore and former Westlake star Brett Reilly.

“I grew up playing lacrosse with Nick, Brett’s little brother, [and a junior at Westlake],” Rosen said. “When I went to visit JU, Brett and his dad were very helpful and answered any questions my dad and I had about the school. It’s awesome to see that Brett enjoys Jacksonville so much. When I went to visit, I was able to see him play in the alumni game.”

Though he will play his final two high school seasons in Texas, then head off to Florida, Joey Rosen said he wouldn’t be where he is without help from his friends in the Conejo Valley.

“I attribute my success to my previous head coach at OP, Tarik Ergin, and assistant Bob Bjerkaas,” Joey Rosen said. “I also believe that I had some of the best teammates, like Max Manyak, and Tyler Bradbury, who always told me that I could compete at that next level. I look forward to hearing about the Eagles’ success this year! My coaches at LA Mavs, Jack Zorzi and Sean Lindsay, were huge to my recruitment. I’d also like to thank my club coaches from Chaos Lacrosse, Jason Gildea, Patrick Diamonon and Karl Lynch. They communicated with schools that were interested in me and helped by pushing me to be my very best every day. One HUGE help was training with Kyle Hartzell, Team USA and MLL Pro player, this summer. I still train with him today.”