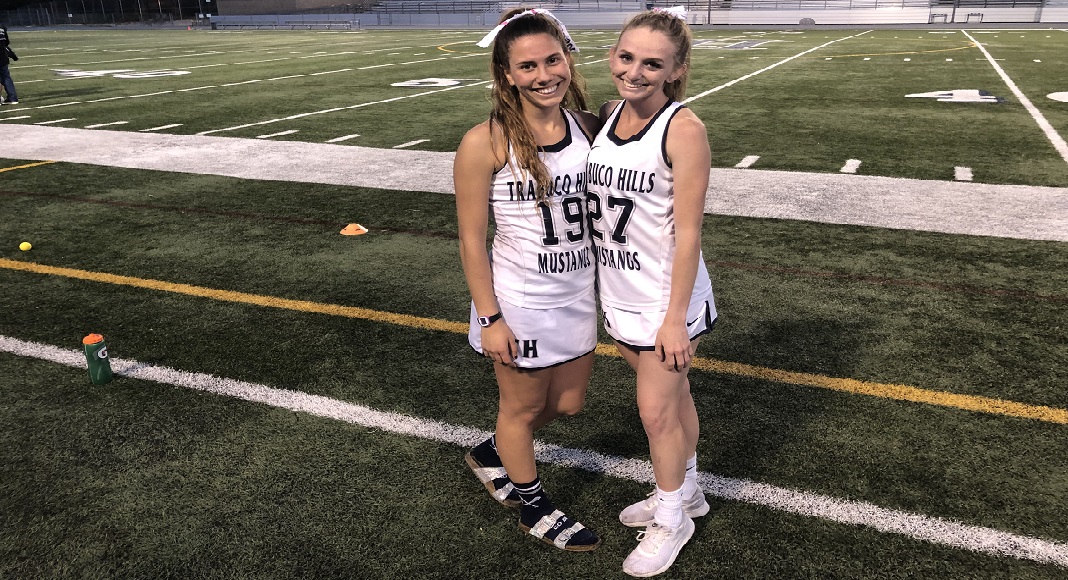 Ieneke Jimenez (pictured left) scored five goals including the game-winner with 1:51 left in the game to help the Trabuco Hills girls lacrosse team maintain their place atop the South Coast League and edge Aliso Niguel 14-13 on Tuesday. The home win gives the Mustangs the season series against the Wolverines and keeps them in first place with three league games left for both teams.

“They [Aliso Niguel] came to play, there’s no doubt about it. Hats off to them as far as just coming in and never giving up and playing hard,” Mustangs coach Scott Leong said.
Hennesey Evans (pictured right) added four goals for the Mustangs.

Trabuco Hills got hot in the second half and scored the first three goals, going up 11-8. The Mustangs built their biggest lead of the game at 13-9 at the 13:11 mark of the second half.

But the Wolverines answered back with four straight goals, tying the game at 13-13 at the 7:59 mark of the second half. At the 3:01 mark, the Wolverines accidentally threw the ball to a Mustangs player in their backfield, and the ball eventually found Jimenez’s stick, setting up her go-ahead goal.

“She can be very deceptive as she comes in and keeps re-attacking the goal. Between Hennessey and her, they can play one off the other,” Leong said about Jimenez.

The Wolverines had a chance to tie the game and possibly send it to overtime, as they were awarded a free position shot with less than a minute left. But goalie Emma Stone made a save, which led to Evans stealing the ball and allowing her teammates to run out the clock.

“She has been stepping it up in a lot of the key games this year. I think once she gets back in her zone of getting enough saves during the game, she tends to get better as the game wares on, especially when it gets tight near the end. That’s when she shines,” Leong said of Stone, who had nine saves for the Mustangs.

Jill Phillips and Morgan Yee each had two goals for the Mustangs while Kiana Callahan added one goal.

The Mustangs’ next game is Thursday in another South Coast League at San Juan Hills at 5:30 p.m. This is a huge week for the Mustangs, who play St.Margaret’s on Saturday in a rematch of last year’s semifinal at 3 p.m.

“For us to have a chance at that [beating St.Margaret’s] we’ve got to be on our game and we really got to want it,” Leong said, adding that he has no intentions of overlooking San Juan Hills as well.

Aliso Niguel was led by Marley Naegele who had four goals while Taylor Wedlock had three goals. Maia Rollins and Sydney Gonzales each scored twice while Kendall Decker and Tori Dacko both had one goal. Defensively, Olivia Kilroy made 10 saves.

“I think the difference at the end was we missed a couple of fundamentals going toward the ball on passes and Hennesey [Evans] did what a top player does, she took over the game, she stole that last pass. She earned it,” Wolverines coach Dave Elkins said.

The Wolverines’ next game is Thursday in a South Coast League game at Tesoro at 5:30 p.m. Elkins was proud about how his team performed against the Mustangs and hopes his team can keep up the stellar play.

“For a while, we’ve been a one to two girl team and now we purposely focus this last year on being an offensive and defensive team that plays together. If you watch any of our tight games, it’s not just one girl you have to cover. We have six other girls ready to step up,” Elkins said.