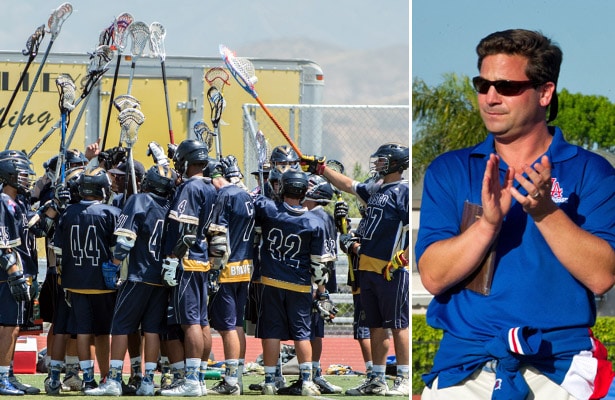 Veteran L.A.-area lacrosse coach Chris Jewett has been named head coach at St. John Bosco effective July 1, the school announced Monday in a news release. Jewett has led the lacrosse program at Los Alamitos for the past three seasons.

“We are very fortunate to be gaining a renowned lacrosse coach who not only has a wealth of experience and enthusiasm,” said Monty McDermott, Bosco’s Director of Athletics, “but who also is a teacher of integrity, whose teams win or lose with a high degree of sportsmanship and mutual respect for their opponents. He is the right choice for Bosco as we look toward the future of our program. I welcome Chris and his family to our community, and I am looking forward to his beginning to work with our young men.”

McDermott said the school has not yet made an official decision whether to remain a club team in the Pacific Lacrosse League or to compete as a CIF program. The Braves went 12-3 and won the PLL’s SoCal Regional Championship this past season, advancing to the club-team state championship game. Bosco went 30-14 in three seasons under former coach Ryland Huyghue.

Jewett, 39, went 27-23 overall in three seasons at Los Alamitos, leading the Griffins to three consecutive playoff appearances. In 2014, his first season, Los Al won the Sunset League championship, going 7-1. Before joining Los Alamitos, Jewett spent two seasons as head coach at Mira Costa. He also is the founder and president of Leverage Lacrosse, and he also founded the Los Angeles Box Lacrosse League, which operates in the fall.

“I am thrilled to become a part of St. John Bosco High School,” Jewett said in the release. “I look forward to the challenge of being a part of Bosco, a legendary college-preparatory school that has turned out so many outstanding students and accomplished athletes. I am excited to get started.”