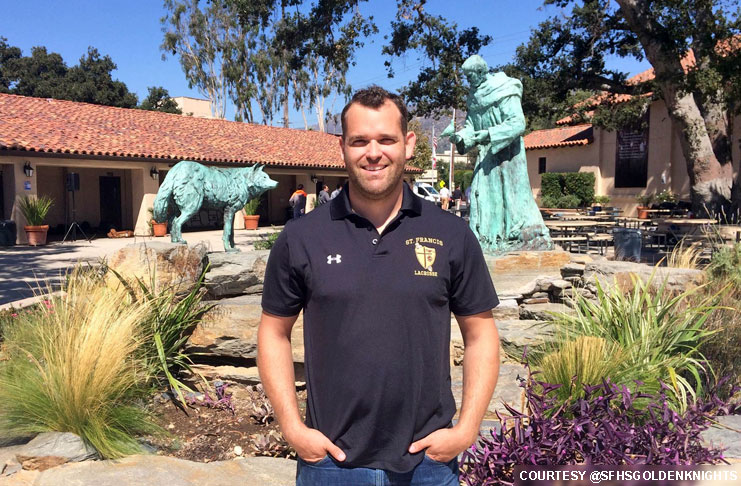 Little, who coached the Eagles in 2011-12, has spent the last four years as a youth pastor in Bozeman, Montana, where he didn’t coach — both because the towns and schools were so spread out that road trips were all-day affairs and because he needed a break after commuting to Chaminade from the Pasadena area for two years while also finishing graduate school.

But after four years away from Southern California, it was time to come back. Coaching, though, was an afterthought.

“We decided to head back here about a month ago, and I had no intention of coaching at all,” Little said, “and it’s funny, but I got calls from different people connected to St. Francis who knew I was back in town.”

Those people talked him into talking with St. Francis about the position, and he ultimately decided to get back in the game.

In addition to a better commute, Little inherits a team that made its first playoff appearance last spring in its fourth year of competition. In those four years under Watson, who stepped down after the season but remains at the school as a teacher, the Knights went 2-10, 8-9 and 5-11 before going 9-8 last spring.

The Mission League will have a much different look to it in 2017 than when Little last coached around here. St. Francis only started its program in 2013, after Little left the area, and Notre Dame will field a varsity team for the first time next spring. Chaminade also has bounced back from some lean times both during and immediately following Little’s time there, and Crespi is hoping to bounce back after a 3-14 record in 2016.

Some things don’t change, though, with Loyola and Harvard Westlake the perennial powers in the Mission League. Loyola won the 2016 US Lacrosse Southern Section championship, the first L.A. team to beat the Orange County champ and claim the crown. But the Cubs had to rally to beat Harvard Westlake in the North bracket semifinals to have a shot at that title. Before taking over at Chaminade, Little was offensive coordinator at Harvard Westlake.

St Francis introduced Little, a four year player at Virginia, where he won two NCAA titles, via a post on the school’s Facebook page:

We are pleased to announce that Mr. Jared Little has been named as St. Francis High School’s new head lacrosse coach. Coach Little’s lacrosse experience, as both a player and coach, along with his Christocentric approach to athletics, makes him an excellent fit for the position at St. Francis. Coach Little approaches the role with a desire to build upon the program’s initial success with awareness on multiple phases of adolescence development, core values, social capital, and incarnational coaching.

While pursuing an undergraduate degree in Religious Studies from the University of Virginia, Coach Little was a member of the school’s lacrosse team that won national championships in 2002 and 2006. In Addition, Coach Little holds a Master of Education in Social Foundations and Leadership from the University of Virginia. He also earned a Master of Divinity from Fuller Theological Seminary in Pasadena.

Coach Little has a strong background in ministry as well as coaching. Most recently, he served as the Pastor of Family Ministries at Springfield Church in Bozeman, Montana, from 2012-2016. Prior to that he worked as the head lacrosse coach at Chaminade College Preparatory School in West Hills, California, from 2010-2012.

“We are thrilled to have Jared joining us St. Francis,” said the school’s Athletic Director, Matt Luderer. “His lacrosse background is impressive, but it’s his approach to athletics and character development that sets him apart. His Christocentric coaching style is completely congruent with the philosophy of St. Francis High School.”

St. Francis High School welcomes Coach Little into the Golden Knight family and is excited about the tremendous impact that will have on the students, the lacrosse program, and the school.