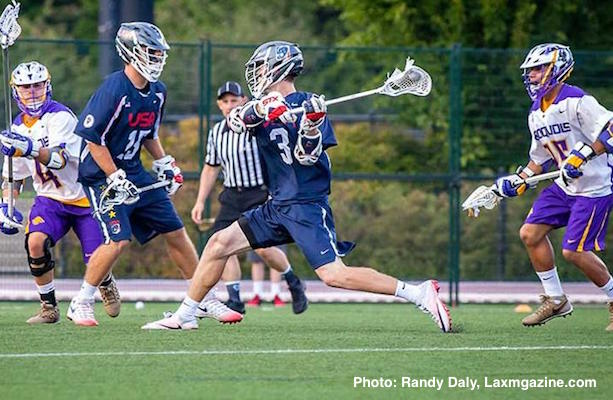 Jared Bernhardt was named the Most Valuable Player of the 2016 Federation of International Lacrosse Men’s U19 World Championship after helping lead the United States to its eighth consecutive title. Bernhardt, also named the outstanding midfielder, was one of five Team USA players named to the all-world team. He was joined by teammates Patrick Foley (defense), Austin Henningsen (midfield), Jack Rowlett (defense) and Michael Sowers (attack).

Bernhardt, a recent graduate of Lake Brantley (Fla.) High School headed to the University of Maryland, was Team USA’s top scoring midfield with 15 points (10g, 5a). His goal with 2:34 remaining in the gold medal game against Canada tied the score 12-12, setting the stage for Ryan Conrad’s game-winning goal with eight seconds remaining. Bernhardt’s older brother, Jesse, was a member of the 2014 U.S. men’s senior team.

Henningsen, from Northport (N.Y.) High School, was a dominant force on faceoffs for Team USA. Henningsen, who helped Maryland to the NCAA championship game as the Terps’ primary faceoff specialist this spring, won 66.7 percent (58-of-87) of his draws in the FIL U19 world championship, including a clutch second-half performance against Canada to help the U.S. rally from a six-goal deficit.

Sowers, a recent graduate of Upper Dublin (Pa.) High School headed to Princeton, tied Alex Roesner as Team USA’s leading scorer. Sowers had 22 points (11g, 11a) and his 11 assists led the team. Sowers had seven points (5g, 2a) in a round-robin victory over Australia and had a goal and two assists during a 5-1 Team USA run to open the second half of the gold medal game against Canada, helping to spur the United States comeback.

Bill Leahy, the longtime head coach at LaSalle College (Pa.) High School, served as the assistant manager for Team USA and was selected as the team’s Graham Lester Spirit of Lacrosse Award recipient.