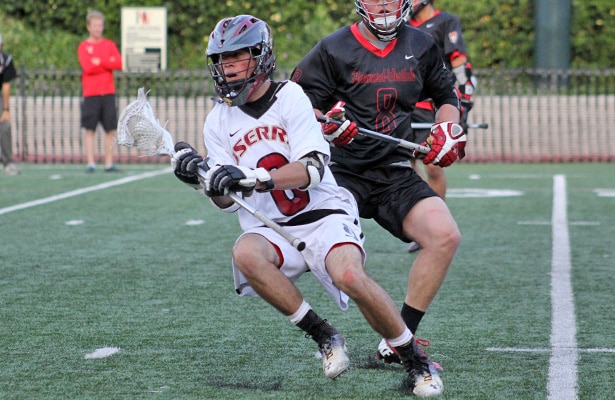 JSerra Catholic High School opened their 2015 season with a strong team effort, rolling to a 14­-5 win over Huntington Beach High School.  Both teams came out at full speed with aggressive play on grounders and physical play on defense.

The Oilers got on the scoreboard first with an unassisted goal from #3 at the eight minute mark of the first quarter. The two teams battled up down the field until J Serra’s Emerson Roth fed crease attackman Matt Karzak to tie the score with two minutes left in the first quarter.

The second quarter began like the first quarter ended with Karzak scoring his second goal of the game on a sweet feed from Hofstra bound James Yanes to put JSerra up 2­-1, and just like that the Lions were in the midst of a 8­-0 tear. Logan Olmsted (2 g) , Jake Schleppy (2g 1a) , Yuta Murata (1g) and Emerson Roth (1g) all contributed to the second quarter onslaught that left  JSerra with an 8 -1 halftime lead.

J Serra, playing the opener without the guidance of head coach Kyle Harrison who was celebrating the birth of his first daughter, came out firing on cylinders in the second half with a relentless defense led by Kennedy Solomon and Nick Georgagis, and an overpowering performance in goal from Beau Largent. The Lions continued on their scoring spree in the 3rd quarter with Karzak scoring his third goal from a bullet feed from Schleppy.   Two minutes later Yanes got his first goal of the season followed by Logan Carroll, Roth’s second of the game , and Yanes again, stretching the lead at the end of the third quarter to 13­- 1.

Huntington Beach, reeling from early season injuries to many key players, never gave up and fought back in the 4th rallying to score four consecutive goals by # 3 2 g, #4 1g, #6 1g, to close the gap to 13 ­ 5 before Yanes scored the final goal to register his first hat trick of the season.  JSerra was led by the outstanding play of goaltender Largent, senior middies Olmstead, Schleppy, Murata and coordinated attack play from Yanes, Roth and Karzak.