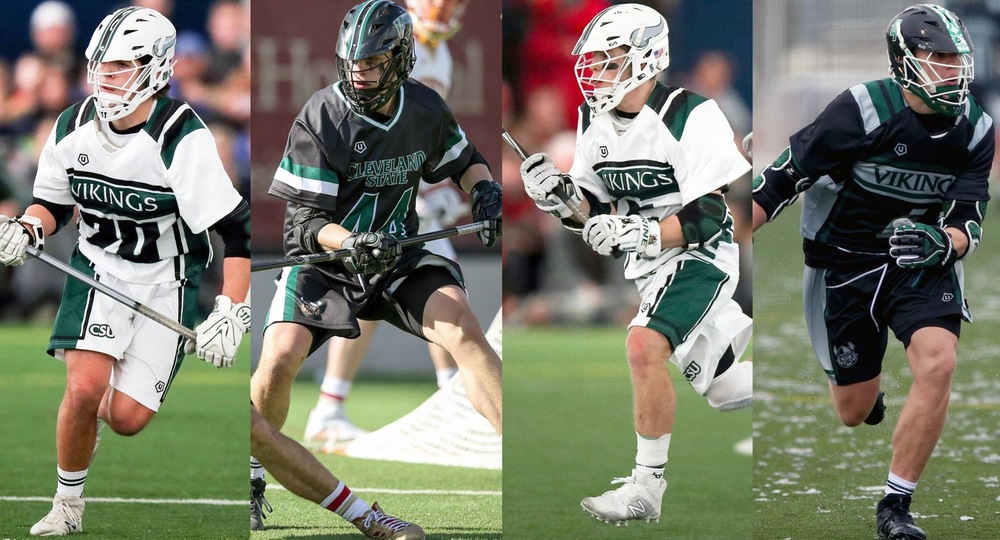 The Cleveland State press release is presented below.

CLEVELAND, Ohio – Head coach Dylan Sheridan of the Cleveland State University lacrosse team announced Tuesday the four individuals that will serve as captains for the 2019 season.

“All four of these young men have demonstrated they represent the values Vikings lacrosse endeavors to embody,” Sheridan said. “They’re eager to serve in the community, put their teammates first and strive for excellence in the classroom. As we head into Year 3, ownership is a theme we talk about often in our locker room. These four—along with our leadership council—have been tasked with the responsibility of guiding this team toward reaching its full potential. I’m proud and excited for this group to lead us in 2019.”

“Isaac is blue-collar work ethic personified,” Sheridan said. “I’ve known him since he was a little guy, from my days as an assistant at DU. Isaac is truly a person of unquestioned integrity, and we are infinitely better the more his fingerprints are on this team.”

Lemke missed the entirety of last season due to injury but still was with the team throughout the campaign, assisting in various capacities. He started each of the first 12 games of his freshman season on defense. Lemke notched nine ground balls and five caused turnovers in 2017.

“Sitting out last year due to injury, Quinn was the consummate teammate—always there for the team despite going through a difficult time personally,” Sheridan said. “The maturity and perspective gained from that experience helped shape Quinn into an even better leader, and I look forward to seeing him making plays in the Green & White again this spring.”

Tesler was the team’s primary choice at the faceoff X for the second straight season in 2018. He won 135 faceoffs and collected 70 ground balls and ranked among the top 25 in Division I in ground balls per game for the second straight year. He won 10-of-16 faceoffs against Duke and 16-of-27 against Robert Morris, both nationally ranked opponents. Tesler also added four goals and three assists on the season.

“Danny is a servant leader,” Sheridan said. “Putting others first is just how he is wired. To get a snapshot, DT holds every program record for anything related to ground balls. Upon graduation, he wants to pursue a career as a firefighter. Danny is a special teammate and will serve as our first-ever two-time captain.”

Wendel played in every game in 2018, starting 12 of 14 contests. He scored 12 goals on the season, posting multi-goal outings at Air Force and against Sacred Heart. He also added tallies against top-tier foes Duke, Ohio State and Penn State this past season. Wendel now owns 27 goals and six assists in his Viking career to date.

“Nick is an impact player for us,” Sheridan said. “I’m sure he is at the top of every opponents’ scouting report. However, this year Nick’s been a more assertive and confident leader. Our team feeds off his energy.”

Cleveland State’s 2019 schedule will see it face seven preseason top-25 teams along with hosting a pair of Big Ten teams. The Vikings will get the campaign underway with a home scrimmage against The Hill Academy Saturday, Jan. 26.

“Isaac is blue-collar work ethic personified,” coach Dylan Sheridan said in a Cleveland State press release. “I’ve known him since he was a little guy, from my days as an assistant at DU. Isaac is truly a person of unquestioned integrity, and we are infinitely better the more his fingerprints are on this team.”