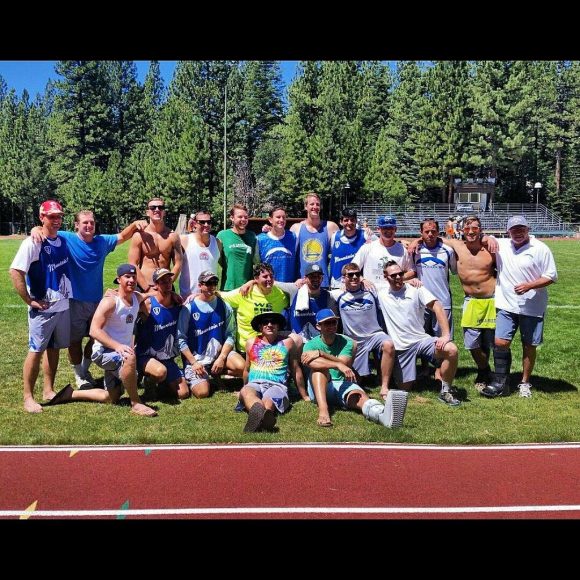 I think anybody would agree that the lacrosse community is unlike any other. Between the people you meet and places you go, there is nothing that is quite like it.

This past weekend (the weekend after Adrenaline U-19 was crowned champion) was the annual Lake Tahoe Invitational for the Open and Masters Divisions, a 24 year tradition that becomes a living dream once a year for 32 teams. Included in these 32 teams is Mountain Top and contrary to the team name, it is comprised of almost all players born, raised, or involved in some way in Orange County lacrosse. I was lucky enough to be a part of the experience of a lifetime for the fourth year in a row.

Most of the tournament games are located a short 100-yard walk from the sandy shores of Lake Tahoe. This unparalleled location proves to be the initial interest piece for most first timers as thoughts of jet skis and jumping rocks become the fixation of the mind.

And this was probably how it started to gain its fame; a great vacation spot for those who can get away from home and head to the Lake under the guise of hard work and athletic competition. But the tournament has become so much more than a weekend getaway or a chance to relive the golden years, I attest that it is the pinnacle of the lacrosse community as a whole.

The tournament boasts competition unlike any other and within each team the diversity contributes to the experience. Mountain Top this year, for example, has someone from every corner of lacrosse: Current OC coaches Adam Guy (SMCHS) and Andy Salcido (El Toro, Chapman) to former legends Ryan Sanders (El Toro, UCSB) and Elliot Dominic (Foothill, Towson) to MCLA coaches Ryan Brent (Concordia) and Doug Abate (UCSB) and even a recent OC grad Wes Schuler (SMCHS, Manhattan). The diversity is not special to our team and in fact is a facet for 80% of the teams in attendance. The tournament itself includes everyone from your uncle who decided to pick up a stick two years ago for his 50th birthday, all the way to current and former NCAA All-Americans.

The diversity creates an unbelievable culture of passion and camaraderie.  After games there are always as many as 200 eager and shirtless players watching games at the main field and exchanging stories about the game they love. This mini community is what lacrosse is all about and the way that the game can bring out both competitiveness and compassion is unique to the sport and the lacrosse community. The exuberant enthusiasm for the game keeps at bay all notions of the parts of competitiveness that keep strangers from becoming immediate friends.

By early evening rumors begin to swirl about which teams are going to have the best barbeques and of course, usually everyone is invited. If you decide to stay within the confines of your own team for the late afternoon, you can head to the Hyatt by night where every team funnels into the bottom level casino that reaches capacity well before 10pm. The casino is used more as a central meet up spot than its original purpose although cheers and jeers fill the gaps in conversations of circles upon circles of players sharing highlights from the earlier games (everyone could have had four or five goals if they just had practiced a little more) and “insider scouting information” for the next days games (everyone is pretty good but their own team didn’t play to their potential).

When the tournament concludes it is back to reality. It’s much more than about how many games you won and how well you played. In fact, for most teams, it was never about that. That part stays in Tahoe. The stories and memories from the weekend with friends stay with you and act as a looking glass into the heart of lacrosse and help garner an appreciation for what the sport is gives back to each and every one of us.

It is easy to believe that the location and timing (heart of summer) is the reason for the instant nostalgia for events like the Lake Tahoe invitational. I attest that this is not the case. In fact, I believe that Lake Tahoe tournament is merely a vehicle for the best people in the best sport to band together and share their passion in every different way imaginable. And this happens everywhere the game is played, it is that feeling of overwhelming joy and calm everyone gets when zipping up your bag after a long practice or a competitive game. Sometimes it just isn’t as blatant. The Lake Tahoe tournament is simply the best at making it overwhelmingly obvious why we play the game. I love this sport.