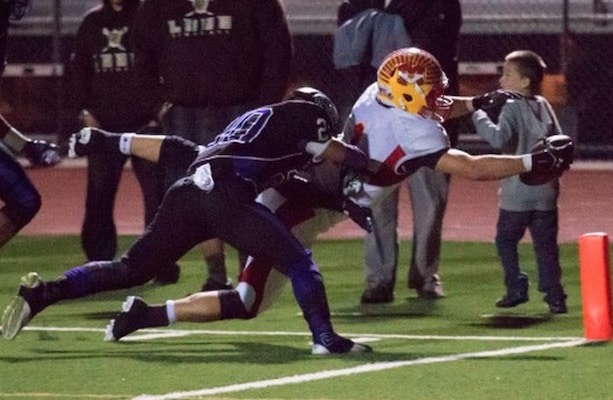 Mission Viejo High School midfielder Rome Innocenzi was named the football Offensive Player of the Week by OCVarsity.com.  Innocenzi was recognized for his performance in the CIF-SS West Valley Division semifinal, in which he rushed for 314 yards and five touchdowns to lead the Diablos to a 41-36 win over Great Oak of Temecula.  Innocenzi had 39 carries and averaged 8 yards a carry. The 5-foot-11, 185-pounds senior ran for 10 touchdowns in three playoff games and is averaging 191 rushing yards a game in the playoffs. Innocenzi was a First Team All South Coast League short stick defensive midfielder for the Diablos lacrosse team in 2014.  Things are looking up for Diablos lax, particularly on the defensive side of the field.  Innocenzi will be joined by his football teammate Teddy Finley, who is a First Team All South Coast League defenseman, and Second Team All South Coast LSM, Shawn Oddou.  Oddou, another two sport star, plays soccer for the Diablos.  These three athletes will give head coach Hudson Parker one of the fastest defenses in the County.

Check out one of Innocenzi’s touchdown scampers in the video below.