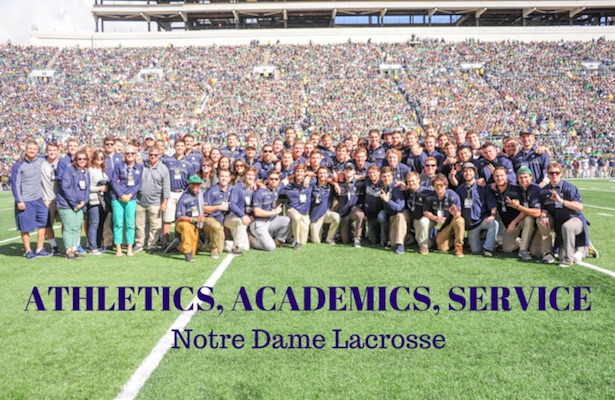 While perusing the web in search of updates on how our Orange County alums are doing in college, I often come across interesting articles that don’t relate to Orange County lacrosse and therefore don’t find therefore typically don’t find their  way on to our site.  I thought I’d start sharing some of the better finds for those that are interested.  Here is this week’s batch:

College lacrosse coaches set a high bar for their players, expecting performance on the field, in the classroom, and in the community.  Notre Dame is just one example, and their triple-threat excellence earned them a roaring round of applause at the Notre Dame vs. Georgia Tech football game. Before their introduction on the field, the team took a photo with the entire Notre Dame student section (see above).

In addition to once again earning a trip to the Final Four in 2015, eight Irish players were named to the ACC All-Academic Team and 17 players completed high-end internships throughout the summer at companies such as Whiting-Turner and Morgan Stanley.

The Irish lacrosse team was recognized last spring as the ACC/United Way “Game Changers” for their weekly mentoring program in which they partner with the Dickinson Fine Arts Academy (DFAA) and teach students critical thinking skills, sportsmanship and self-motivation through hands-on activities.   continued their community involvement on Thursday as the Irish traveled to Chicago to work with O.W.L.S. Lacrosse for their fourth-annual Playing for Peace youth clinic.  For the full article go to: Notre Dame Lacrosse: Athletics, Academics, Service

And You Thought Lacrosse Was Expensive.

For only $70,800 per year (not a typo), high school football players with an eye on an NFL career, can attend IMG Academy and receive high-performance training, college preparatory courses, coaches with N.F.L. playing experience, facilities that resemble a small college more than a high school, and a chance to play a national schedule and on ESPN against some of the highest-rated teams. Need-based financial assistance is available. School officials would not provide specific figures, but they said that payments by families could range from tens of thousands of dollars to a competition fee (from $3,750 to $4,500) to nothing.

The academy was founded in 1978 by Nick Bollettieri as a 15-acre tennis boarding school.  IMG bought the academy in 1987, which now covers more than 500 acres, and expanded the offerings to include golf, soccer, baseball, basketball, lacrosse, and track and field. Football began in 2013 as part of a $197 million campus expansion. Games are played in a 5,000-seat stadium outfitted with suites and a jumbo video screen. Digital screens depict each player’s name and face on his locker. Some N.F.L. players train there in the off-season, as do college players preparing for the pro draft.  If you are only going to read one of these articles in full, read this one.  It offers some interesting insights in the direction/professionalization of high school sports and the Academy: High School Football Inc. – The New York Times

Lacrosse is Exploding in Georgia

While much attention is paid to the growth of lacrosse in the West, it appears that growth is no less impressive in the southeast.  Georgia, long known for being a football and baseball state, is now the home of the NLL Georgia Swarm and the MLL Atlanta Blaze. In addition, Georgia hosted the last two MLL championships at Keenesaw State and starting the ACC Championships will be held at Keenewaw State.   For the full article go to: Why Atlanta is an emerging lacrosse hotbed – Atlanta Business Chronicle.

The growth of course is being fueled by participation in youth and high school programs.  Earlier this year 3d Lacrosse announced an expansion into Georgia.  3d Lacrosse, which operates and trains more than 130 clubs in 14 markets across the country, held tryouts for six boys’ teams (graduating years 2017 – 2022) in September.  The 3d programs will include their box/field hybrid training model.

Sam Hubbard who is currently making headlines as redshirt freshman defensive end for Ohio State, committed to play lacrosse for Notre Dame before deciding on football.  Hubbard was a two-sport standout for Cincinnati’s Archbishop Moeller High School, playing safety on the gridiron and midfield on its lacrosse team. Hubbard was verbally committed to play for the Irish when Urban Meyer waltzed through Hubbard’s gym class during his junior year in high school and saw him playing dodgeball.  From there, their relationship began, and by early April 2013, Hubbard decommitted from Notre Dame and pledged to play football for the Buckeyes.  For the full article go to: Sam Hubbard’s journey: The road from lacrosse commit to OSU defensive end | The Lantern