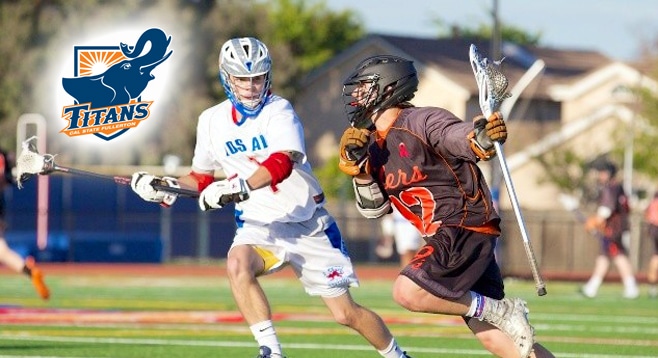 Huntington Beach High School’s Micah Willis will be enrolling at California State University in the fall and playing lacrosse for  Titans.

Like his former Huntington Beach teammate, Alex Kowalski, Willis is expected to have an immediate impact on the Titans’ already explosive offense, that will be felt around the the MCLA . Willis’ quickness, creativity, and field awareness make him a very difficult defensive matchup.  Kowalski was recently named Southwest Lacrosse Conference Player of the Year as a freshman.  Willis gives opposing defenses  an equally dangerous threat to worry about for the next three years.

Not surprisingly, head Coach Mike Ansel is excited for the potential Micah will bring to his squad, “Micah is one of the most well rounded attackmen in all of OC. He is a player who does almost everything right, a very smart player which is in my opinion the most valuable asset to have. Having an opportunity to coach Micah over the last couple summers with Rip City has been awesome, seeing him progress into the player he is now is what I was most excited about. Micah will fit in VERY well with our team, he will help us get to the level we want to be at. Playing alongside SLC Player of the year and best friend Alex Kowalski is something I look forward to watching.”

Willis knows Fullerton will be a good fit for him as a player and student, “Fullerton has an awesome business program that is recognized nationwide and by business’ everywhere and on top of that their lax team is one he would like to be a part of. I am look forward to having a solid freshman year, meeting new people and playing some high level lacrosse”