Huntington Gets Much Needed Win in OT 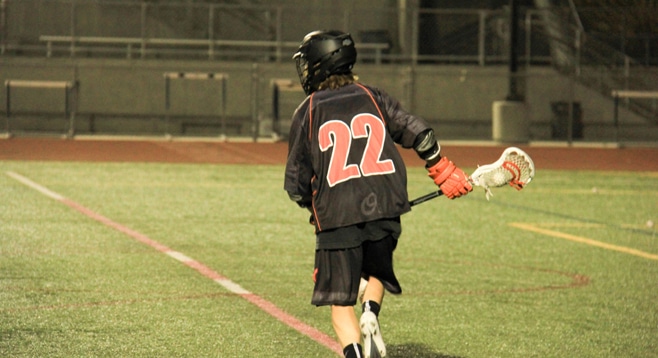 It took double overtime, but the Huntington Beach High School Oilers, a pre-season Top 10 team, finally picked up their first win of the season in double overtime on Friday night.

After struggling through one of the most difficult schedules in Southern California during their first six games, Coach Brian Dunn’s crew could not be happier. The Oilers seemed in control at several junctures as they built up 6-2 and 9-6 leads, but the scrappy El Toro Chargers kept clawing their way back into the game. Then with the score tied at 11 and only 47 seconds left in regulation, Parker Core put El Toro up 12-11 with his third goal of game. Now it was time for HB to show their gritty side, and Michael Lacy of HB answered a mere 15 seconds later to tie the game at 12 with his second goal of the game, and send the game into OT.

In the second overtime after Sean Mastro won his 20th faceoff (20/28 on the day), HB patiently kept possession until James Sidrak found Daniel Schulze in front of crease and Schulze buried it for the game winner. The Oilers now look to build on the momentum of the win to show that the pre-season prognisticators were right and position themselves for a playoff spot and perhaps a Sunset League title.

Goal scorers for Huntington were as follows; Mastro 3, Schulze 2, Sidrak 2 (1A), Akita 2, Lacy 2, Willis 1 (2A), with goalie Cole Daws even getting in on the action. Howell and D’Zmura each registered 1 assist.

**Article has been edited