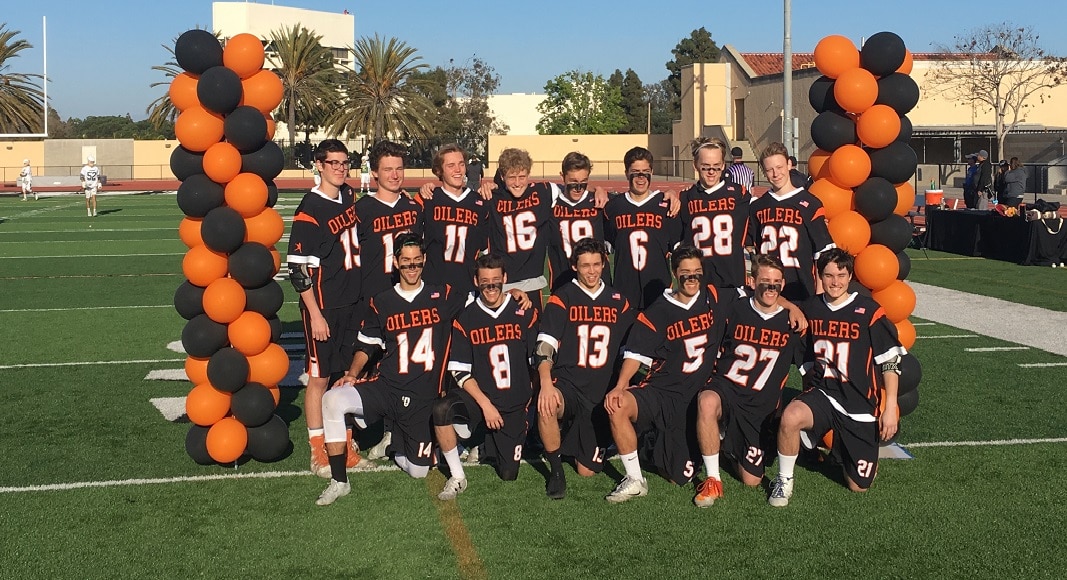 For the second time in three days, Huntington Beach boys lacrosse team reigned victorious over Edison, beating the Chargers by a score of 12-3 on Friday at Huntington Beach High School.  This time, the Oilers got to celebrate their senior night.

“I told them that it’s their night, it’s their senior night. That was the biggest thing I reiterated to all my seniors. I wanted them to play within each other. I made it clear that we have to go 5-0 in this last stretch if we want a bid in the playoffs,” Oilers coach Michael Lacy said.

With one full week left to play, the No. 17 Chargers are sitting on the playoff bubble with much brighter prospects than they had one week ago.  The win over Edison coupled with No.16 Aliso Niguel’s loss to unranked Dana Hills on Thursday keeps the Chargers in the hunt, and sets up a potential all or nothing game when they play No. 9 Yorba Linda in the final game of the season on April 27.

“Yorba Linda got the edge on us last year by quite a bit of goals last year. [Our] seniors are very hungry and they understand that’s their last game and could potentially their last game of their senior year,” Lacy said.

As for Friday’s game,  the Oilers took the lead on the opening faceoff and never looked back, as they scored the game’s first two goals. The Chargers made it interesting by scoring a goal from Drake Choi, cutting the lead down to 2-1. But it turned out to be their only goal of the half, as the Oilers held them scoreless the remainder of the first half, going into halftime up 7-1 and eventually running away with the match.

Tyler Alexander led the Oilers with four goals while Timmy Benson and Michael Goodheart added two apiece. Harrison Dean, PJ Clynes, Donnie Schulte and Jacob Chance each scored once for the Oilers, which got 15 saves from Grady Mercier.

“It’s a special game obviously because it’s your senior night but at the same time, we don’t want that to psych us up and let it get to our heads and especially since we played [Edison] on Tuesday and we put up a pretty good score on them. We didn’t want that going to our heads either. We knew that they can come out and play all four quarters and we just had to do the same,” Mercier said.

For Edison, Choi found the back of the net twice while Gavin Pace also scored. Hunter Whalen made 12 saves for the Chargers.

The Oilers’ next game is Monday at Marina followed by a home game against Capo Valley on Wednesday. Their last game of the season is Friday at No.9 Yorba Linda. Both of those games will begin at 6 p.m.

Edison’s next game is Monday at home against St.John Bosco at 4 p.m.