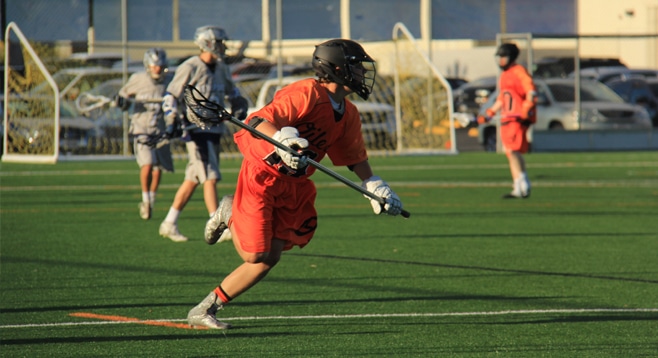 After starting the season 0-6 the Huntington Beach Oilers have won two in a row, the second win an ever important league match against Newport Harbor.

Micah Willis wasted no time getting started on his hat trick and netted two goals in the first three minutes of play to put Huntington up a quick 2-0. Newport would finally settle down defensively and start playing solid one-one-one. A long Sailor possession created an opening for middie Chas Beek top side and finished with a jump shot square to the goal. Huntington’s Daniel Schulze who also had a two on the day, scored on the ensuing possession to keep the lead at two. Hard riding pressure from Newport forced a turnover that allowed Kole Escher to cash in on to pull the Sailors to within one. An end of quarter goal by Sean Mastro made it 4-2 at the end of the first quarter.

Huntington’s defensive pressure in the second quarter shut out the Sailor’s offense and kept them at two goals while the Oilers added three of their own (LSMs Zach Harju and Sean D’Zmura, and Willis,). The defensive pressure brought by Huntington’s poles forced easy saves produced by outside shots for Huntington goalie Cole Daws who played an excellent game totalling 13 saves on the day. Matt Akita added a goal fighting to the middle of the field for a smooth finish. Three Newport scores, two by Escher and the other by Chris Buchanan, Newport had new life down four with 9 minutes to go. Unfortunately rushed shots and poor skip pass choice hindered their comeback as Huntington went on to win 9-5.

Stars of the Game:
1. Cole Daws, goalie, HB: Daws had one of his better games of the year. What can’t be seen on the stat sheet is that he stopped three or four inside drives from X that could have turned the tide in Newport’s favor.

2. Micah Willis, middie/attack, HB: Willis is one of those players whose motor is always running. He is all over the field and when Schulze and him are on they are a deadly combo.

3. Kole Escher, attack, NH: When the game comes down to it the captain has the ball in his stick always giving it his all. He fought for each of his three goals and would have had some more with a better shot selection.