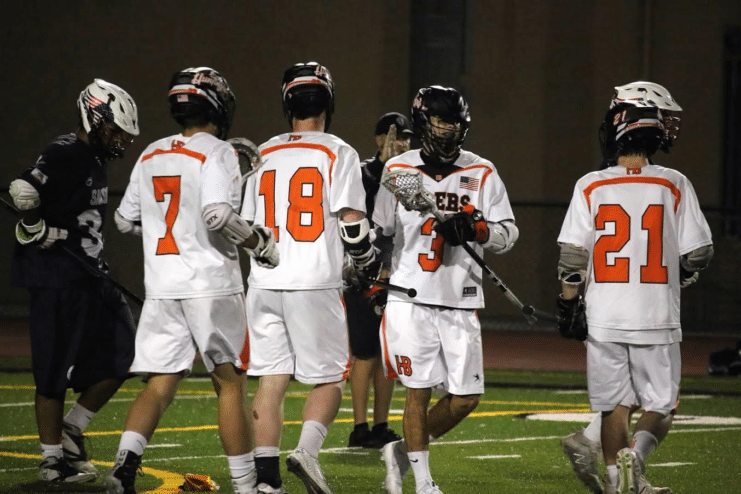 Ryan Kelaher, now in his second year as head coach, has the Oilers heading in the right direction in terms of the Sunset League  With the win, the Oilers (5-4, 2-1) have equaled their league win total from last season. More importantly, Huntington Beach is only a half game behind Los Alamitos and Edison, both of which are 2-0 in league.

“I think everyone played a great part [in the win]. Our transition game proved to be a big-time help,” Kelaher said.

Trailing 5-3 going into the fourth quarter, the Sailors added to their lead thanks to a goal from Zachary Quinonez to give them a 6-3 advantage. That goal however, turned out to be the last goal that Newport Harbor would score.

The Oilers got fourth quarter goals from Ricky Masters, Cayden Carthey and the game-tying goal from Ayden Colbert to draw even with Newport Harbor at 6-6, at the end of regulation.

In overtime, neither team could find the back of the net. Huntington Beach had the ball at one point and looked like they were going to turn it over to the Sailors because of an off sides call. But the call was waved off because Kelaher called time out prior to the call.

After the time out, a penalty on the Sailors gave Huntington Beach an extra man opportunity. The Oilers took advantage of of EMO by working the ball around the offense until Jacob Alkire got the ball with a decent look and was able to score.

“Huntington Beach is an exceptional team. We made mistakes that they capitalized on. We just can’t make mistakes,” Newport Harbor coach Mark Todd said.

Newport Harbor was led by Quinonez who had two goals. Race Mooers, Alex Pearce, Patrick Lynch and Jared Rabin had one goal apiece. Goalie Hunter Rausch had nine saves for the Sailors. Todd said he was impressed by both Quinonez and Rausch.

For Huntington Beach, Masters led the way with two goals. Michael Goodheart, Alkire, Colbert, Carthey and Sean D’Zmura had one goal each for the Oilers. Goalie Grady Mercier had eight saves, which also included a big save in the waning seconds of the fourth quarter.

Next up for Newport Harbor, a trip to Los Alamitos to play the Griffins on Wednesday at 7 p.m. For Huntington Beach, it plays at Marina on Tuesday at 6:30 p.m.