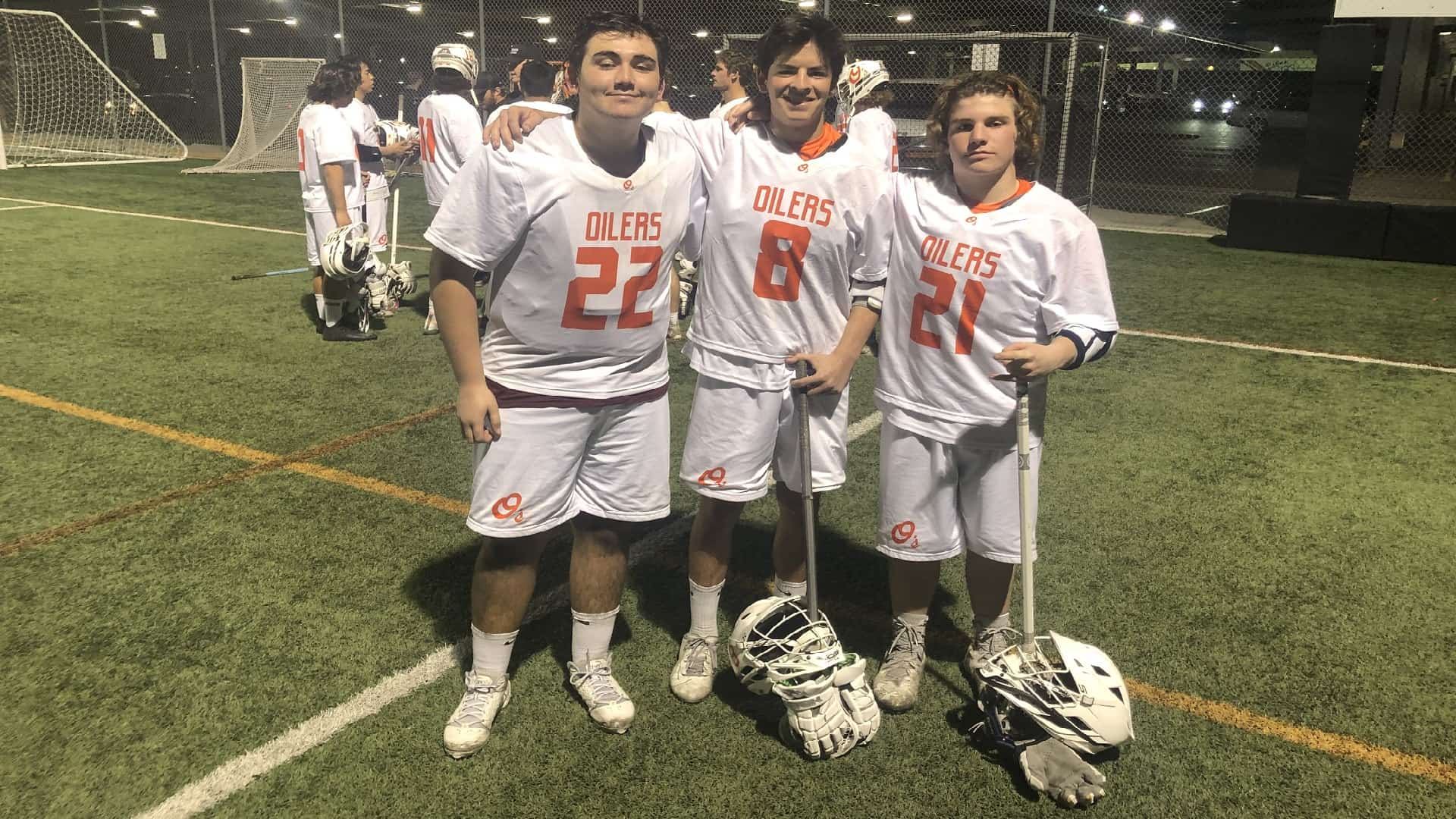 Brody MacDonald (pictured middle) led the Oilers with five goals while Tabbert added three goals. Judah Ferrari scored the equalizer with less than two minutes in the fourth quarter while Lou Penaflor (pictured left) was a force in the cage, racking up 26 saves.

“Brody never has failed, he’s always amazed everyone on the team. I’m so excited to keep on playing with him throughout the season,” Tabbert said. “I just honestly played for my grandma, because she just recently passed away in the last year and that’s what motivated me throughout the game.”

The opening quarter was one to forget for Huntington Beach, as Aliso Niguel scored the first five goals and led 5-0 at the 2:40 mark. The Oilers didn’t get their first goal until the final 30 seconds of the quarter when MacDonald found the back of the net.

“Unfortunately, we ‘re far too familiar with letting teams come in and dominate and go faster than us immediately and not putting our foot down that first quarter. The number one thing with my kids after that first quarter, they weren’t just let down by themselves, but they were pretty [ticked] off. They know what they need to do and stop dropping the easy passes, put in the easy shots and everything else ran itself,” Oilers coach Michael Lacy said.

MacDonald completed a natural hat trick by scoring the first two goals of the second quarter to cut the Wolverines’ lead down to 5-3.  Aliso Niguel’s Jeffery Hoang (4g)and Tabbert then traded goals to make the score 6-4 at halftime.

Huntington Beach kept the Wolverines off the scoreboard in the third quarter thanks to Penaflor making some last-second saves while offensively, MacDonald scored at the 6:26 and 3:39 mark, tying the game at 6-6. The Oilers almost took the lead in the last minute, but a crease violation wiped away the goal that would’ve given them their first lead.

Aliso Niguel retook the lead at 7-6 off of a man-up penalty goal from Hoang. The Wolverines added a goal from Tommy Walsh, who scored after one of his teammates scooped a loose ball off the ground, and suddenly the lead was 8-6 at the 6:13 mark.

MacDonald’s fifth goal of the game cut Aliso Niguel’s lead down to 8-7 at the 3:27 and almost two minutes later, Ferrari’s first goal of the game tied the game at 8-8. The Oilers eventually got the ball to MacDonald, who faked a shot and found Tabbert who scored, giving the Oilers their first lead of the game and the win at 9-8 with 11 seconds left.

The Wolverines had one more chance to tie the game, as Walsh got the ball and took one final shot. But the shot went wide, as time expired.

Connor Homrighausen and Walsh both added two goals for Aliso Niguel. Travis Mooney made 10 saves for the Wolverines, who was ranked No.4 in the CIF-SS Division 2 preseason poll while Huntington Beach was in the “others” part of the poll.

“I’ll give them [Huntington Beach] all the credit in the world, they game planned us really well after the second quarter and their goalie made a lot of phenomenal stops that I think kind of swung the momentum in their favor. It’s early in the season, it’s late February lacrosse, it’s going to be sloppy, so we live and we learn from it and we move forward as a stronger team,” Wolverines coach Zach Henderson said.