Hoyt Crance to Wear No. 30 for Yale 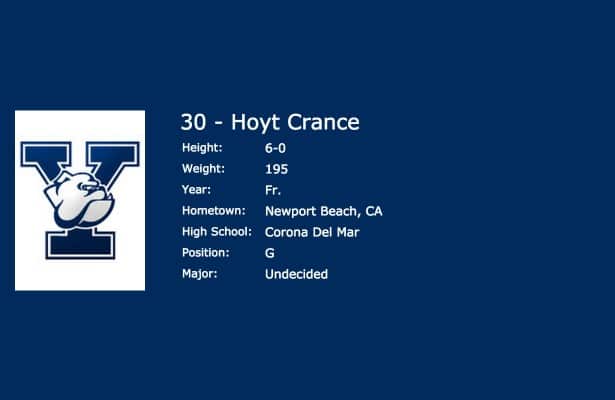 Yale University Head Coach Andy Shay welcomed freshman Hoyt Crance (Corona del Mar) and 10 other newcomers to the Bulldogs today.  Crance is the only goalie in a class that otherwise includes five midfielders, four attacks, and a defenseman.  He is also the only Californian in group that also includes five from New York, three from New Jersey, and one from Canada.  The announcement from Yale offered the following profile on Crance:

Before Yale: Four-year letter winner in both lacrosse and football at Corona-del Mar High School (Newport Beach, Calif.)… Recognized as an All-American by US Lacrosse…Selected All-Orange County three times…Helped the football team win the 2013 state championship with a perfect (16-0) season…Set the school record for most career tackles…The Sea Kings went 75-6 (lacrosse) and 50-6 (football) during his four years…Captain of the lacrosse team as a junior and senior and the football team as a senior…Named the Ron Davis Sea King Male Athlete of the Year…US Lacrosse Academic All-American…National Football Foundation and Hall of Fame Scholar Athlete honoree…Orange County Football Academic All-American…Won Senior Awards in both Physics and English…Recipient of the Principal’s Award for academic achievement and the Academic Lamp (with highest honor).

Personal: Hoyt Crance (pronounced Krants) is the son of Andrea and Frank Crance…Twin brother, Hugh, will play lacrosse at Notre Dame…Teammate of  midfielderMichael Keasey, ’16, both in high school and college…Interested in a career in sports management, business or the media.