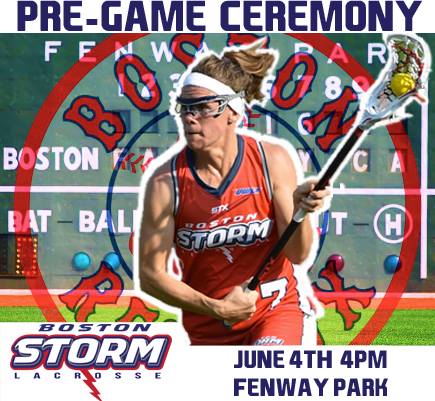 History will be made this weekend when St. Margaret’s girls lacrosse head coach Holly Reilly and her Boston Storm teammates play for the inaugural United Women’s Lacrosse LeagueChampionship. The Storm, Long Island Sound, Baltimore Ride, and Philadelphia Force will compete to see which team will become the first-ever champions of a professional women’s lacrosse league.

UWLX Championship Weekend gets underway with a semifinals doubleheader at Homewood Field on the campus of Johns Hopkins University on Saturday. The Long Island Sound (6-2) secured the no. 1 overall seed in the playoffs and will face no. 4 Philadelphia (2-6) at 5:30 p.m. on Saturday. The no. 2 Storm will meet no. 3 Baltimore in the night cap at 7:30 p.m. to conclude the semifinals.

After the Saturday action, the winners of the two semifinal matches will square off that Sunday afternoon in a 1:00 p.m. title match, where the first-ever UWLX Champions will be crowned.

Can’t make it to Baltimore? Both semifinal matches and the title game will be available for live viewing through the ESPN platform via the WatchESPN app and ESPN3.com.

In addition to coaching at St. Margaret’s and playing professional women’s lacrosse, Reilly is also the US Lacrosse Orange County High School Girls Chair and the Director of Girls Lacrosse at Victory Lacrosse. Reilly made some time in her busy schedule to chat with MaxLaxOC.com to share her experience and thoughts about playing professional women’s lacrosse.

MaxLaxOC.com:What does it mean to you to have the opportunity to continue playing competitive lacrosse?
HR:It was very unique and humbling to play in the first women’s professional lacrosse league. Although the inaugural season comes to a close next weekend, the experience will stay with me for a lifetime. Having the opportunity to compete once again on an elite stage and battle with some of the best players provided a competitive atmosphere that I miss. It also provided me with an opportunity to be coached by the legendary Amy Patton which enhanced my offensive and defensive game IQ.

MaxLaxOC.com: Are you looking forward to playing one last time on “championship weekend” (July 31 in Baltimore)?
HR: I CANNOT wait for championship weekend July 30th and 31st and to seeing the stage set for a competitive lacrosse weekend. I encourage young laxsters and Boston Storm Chasers to attend and cheer us on!

MaxLaxOC.com:How cool would it be to raise a championship trophy in the inaugural season of a women’s pro league?
HR: Wow…I had yet to imagine raising the championship trophy in the inaugural season of women’s professional lacrosse, but YES, it would be awesome. The moment would be memorable and satisfying because of the relationships Boston teammates have with one another and the growth we have achieved in two short months.

MaxLaxOC.com:Boston has beaten Baltimore twice this season, but both were by just one goal. What’s it like facing a team three times?
HR: Baltimore is a formidable opponent, and I cannot wait for Boston to face the Ride in Championship weekend. Ultimately, from this point on, we need to play disciplined defense and smart offense. Everyone is going to bring their GAME, so it is up to Boston to bring ours and then some.

MaxLaxOC.com:What was the level of play in the UWLX like, compared to your college team and with the US National Team?
HR: Competition in the UWLX brings to mind lacrosse on steroids and street hockey. Steroids because every player is jacked, physically fit, and mentally driven; street hockey because of the new rule changes. For a veteran player like me, it feels like I’ve gone back to middle school and am playing pick-up because of the freedom players have on the field. The game is quicker, smarter, and more fun than ever before.

MaxLaxOC.com:Do you think the first season generated enough interest to make the UWLX sustainable?
HR: My hope is that the first season was just that…the beginning of something great. There are a number of details and structural components to fine tune, but I am confident in the UWLX commissioner, Michelle DeJuliis, and her ability to collect feedback and make necessary changes prior to the 2017 season. The girls who attended games walked away impressed and wanting more. Now we need to get more young lacrosse players in the stands.

MaxLaxOC.com:Do you plan on paying again next summer?
HR: Next season is still a ways away, so my focus is on Boston Storm and this weekend’s championship games. I look forward to reuniting with my teammates and experiencing a Boston STORM!!!!