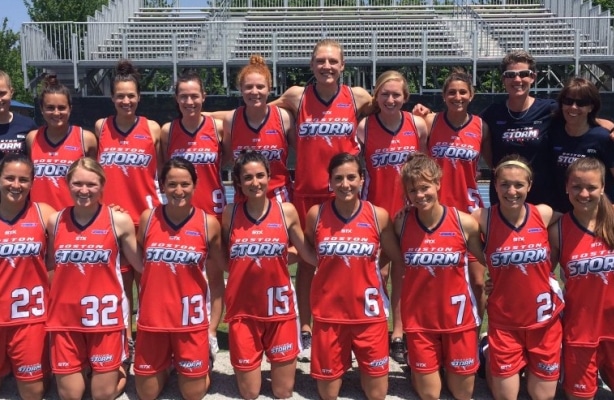 Professional women’s lacrosse became a reality over Memorial Day weekend, and St. Margaret’s girls’ lacrosse coach Holly Reilly was there to help the United Women’s Lacrosse League make history. Reilly (no. 7 in the front row above) started at defender as she and her Boston Storm teammates defeated the Philadelphia Force 16-8.

Consistent with the league’s strategy of scheduling games that coincide with well-attended girls’ lacrosse tournaments, Saturday’s doubleheader was played at Lehigh University in Bethlehem, PA in conjunction with the U.S. Lacrosse Women’s National Tournament. This gave the Orange County National Tournament Team the opportunity to cheer on Reilly. Kate Hick, head coach of the National Tournament Team said, “It was so much fun to not only cheer for one of our own, but see the beginning, of what I hope, will become a larger league for years to come.”

Reilly took some time out of her busy schedule to chat with MaxLaxOC.com.

MaxLaxOC.com:What were your thoughts and emotions about being one of the first women to ever play in a professional women’s lacrosse game?

HR: “Leading up to the weekend, there was a lot of anticipation and excitement about the inaugural women’s semi-professional league. Teammates were checking in with one another, and there was a lot of media attention to hype the league and the participating players. I felt extremely fortunate to have been drafted and was super stoked about my Boston Storm teammates and our coaching staff. On the field, it was intense and competitive just like old times. 🙂 It was exhilarating to represent the first women’s team from Boston and to play with such a great group of women over Memorial Day Weekend.”

MaxLaxOC.com: How do you think the UWLX will help grow the game?

HR:The league is an opportunity for post collegiate female athletes (warriors!) to pursue the next level of lacrosse. For younger lax rats, the league provides exposure to elite female athletes. As a community of female role models, the United Women’s Lacrosse League will create more playing, learning, and developmental opportunities that enhance the overall female lacrosse experience.

MaxLaxOC.com: The players do this for a travel stipend only (no salary). What motivates you to do this? It’s obviously not the money.

HR: Selfishly I was motivated to see if I could still hack it! 🙂 But deeper inside is a burning flame that will never go out, and that is the fire to compete and to compete at the highest level. Having had the incredible opportunity to play on the 2009 and 2013 US Women’s World Cup Teams, the UWLX beckoned me back to the field. There is an incredible, lasting feeling that every athlete knows…the feeling when you step on the field with your teammates and you compete with and compete for one another. I also possess a love for learning; I hope that my experience this summer will improve my coaching and increase the impact I have on budding lacrosse players.

MaxLaxOC.com: What are your thought on the rule changes (shot clock, 2-point goals and the canceling of stoppages on a whistle)? Do you think these changes may find their way down to the high school and college levels?

HR: As the game evolves, so must the rule book. The rule changes are meant to enhance the player and spectator experience, and I feel the UWLX has achieved this. Quick starts on the whistle are probably the biggest modification for a player like me, but you adjust quickly and revert back to habits from other sports like field hockey and basketball. I LOVE getting to move on whistles, and I hope this change finds its way into NCAA and the US Lacrosse rule book.

Women’s Professional Lacrosse League Begins With a Mission in Mind