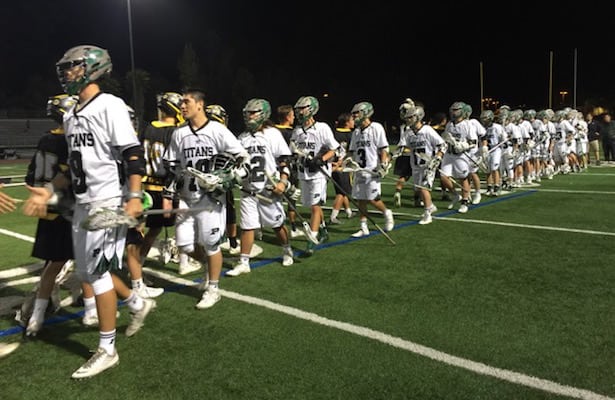 Coming off of a tough road loss at St. Margaret’s over the weekend, and facing another tough road test against rival Cathedral Catholic this Friday, it would have been easy for the #3 ranked Poway Titans (#6 in California) to lack focus Tuesday night at home against a perennial Orange County powerhouse like Foothill-Santa Ana (#8 in California).

The Titans didn’t see it that way.

Instead, Poway fought and scrapped for every inch against one of the most aggressive opponents they have faced this season, and behind a hat trick from senior midfielder Zach Hodge (Cleveland State), and excellent defensive performances from fellow seniors Jake Fiske (Bryant) and Bailey McLaughlin (Colorado Mesa), the Titans ended the night in victory by the slimmest of margins, 8-7.  With the win, the Titans capped off their 2016 regular season home campaign with an unblemished 11-0 record (12-3 overall).

Head Coach Zack Burke, who is seeking his second  CIF championship in just his fourth season at Poway, attributed the victory to “staying disciplined … the guys knew that this was going to be a dogfight and they got after it.”  The win was even more impressive when considering that senior Poway FOGO Zane Abbott (Southwestern) was sidelined for his second straight game due to injury.

The game was close from the starting face-off, with neither team ever having more than a single-goal advantage.   After Foothill scored the first goal early, sophomore Kienan Morrissey, in his first start of the season, tied the game with a goal.  Hodge scored two of his three in the first half, and senior Brad Belasco (Westminster) and sophomore Kobe Brown added one each, and Poway led 5-4 after the first half of play.

Foothill again pulled even in the third quarter, and after the Titans went ahead on a goal by junior Nick Beeson (Bryant), the Knights scored twice in the fourth quarter to take the lead, and the situation looked bleak for the home team with less than 4 minutes to play.  But great defensive plays by Fiske and McLaughlin, and a key ground ball by junior Adam Voggenthaler, kept Foothill at bay for the rest of the game.   Hodge then went back to work, serving up an assist for an athletic inside score by junior Matt Letteri with just over 2 minutes left, and then topping the evening off with the game winner, a sniper shot from 12 yards out with just 1:05 remaining.  Poway held on for the final minute to secure their 12th win of the season.

Foothill fell to 13-5 with the loss, and will face Torrey Pines in their season finale, while the Titans will try to carry their momentum to Cathedral Catholic on Friday evening when they face the 10-7 Dons on the road.