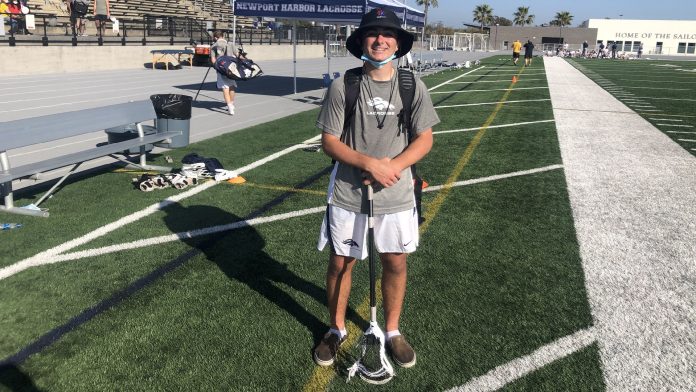 The Trabuco Hills boys lacrosse team outscored Newport Harbor 7-2 in the second half, rallying back from a 6-4 halftime deficit to win 11-8 on Saturday at Newport Harbor High School.

Austin Hicks (pictured) led the way for the Mustangs with five goals. Cole McKenney and Jordan Venz each scored twice and Ryder Roth and Tristan Bassett each found the back of the net once for Trabuco Hills.

The Sailors started the game in promising fashion, carrying a 5-2 lead into the waning seconds of the first quarter. However, the momentum started to shift in the Mustangs’ fave when Hicks tallied with five seconds left to cut the Trabuco lead down to 5-3.

The second quarter saw the Mustangs wait patiently for their first goal of the quarter, as they were unable to capitalize on their offensive possessions. Trailing 6-3, McKinney scored at the 2:01 mark and made the score 6-4, which wound up being the halftime score.

“We just stuck with our game. I think our offense is super talented, we really moved the ball well and I just knew we would eventually rebound,” Mustangs coach Eric Bassett said. “Our team is so young, six of our starters that we’re starting are either sophomores or freshman.”

Trabuco Hills offense started to find more rhythm with a three goal run in the Q3 but the pesky Sailors would not go away. Venz drew the Mustangs to within 6-5 at the 8:07 mark and 49 seconds later Hicks tied the game. The Mustangs took their first lead of the game at 7-6 with another goal from Hicks at the 6:54 mark, but 40 seconds later, Luke Barnes of Newport Harbor tied it up at 7-7.

Trabuco Hills retook the lead for good with three seconds to go in the quarter courtesy of Hicks late goal.

The Mustangs opened their biggest lead of the game at 10-7 and once again Barnes answered for the Sailors with a goal at the 6:14 mark to make the score 10-8. But that was as close as Newport Harbor would get, as the Mustangs got the dagger goal from Hicks, with 3:33 remaining, giving them their second win of the early season.

“In the second half, we stopped playing as a whole. We started playing hero ball, we missed some clears, we didn’t get the ball much on offense and I’ll take accountability, I got a two minute non-releasable that kind of shifted the game,” Barnes said.

Barnes led the Sailors with four goals while Aiden Brutman added three goals. Logan Atkins found the back of the net once. Jerome Snyder had 10 saves to help keep the score close.

Both teams return to action on Wednesday. Trabuco Hills (2-0) plays at Corona Del Mar at 6 p.m. while Newport Harbor (3-3) plays at Foothill at 7 p.m.