Hick Steps Down as Foothill’s Coach 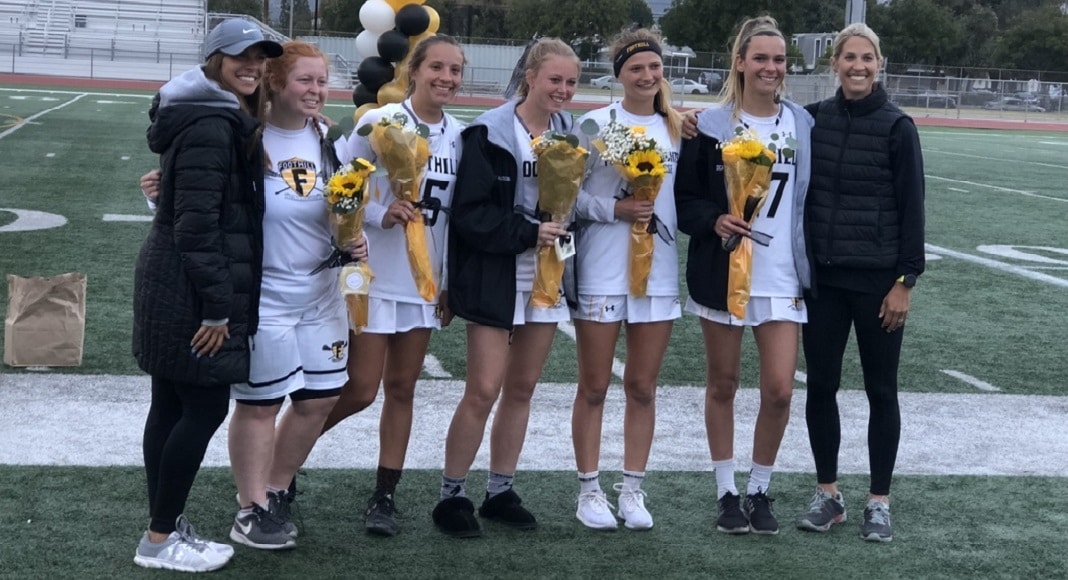 Foothill girls’ lacrosse coach Kate Hick has announced that she will step down as head coach to spend more time with her young family.

“I got two little kids at home that need a mom to help them. I’m hoping to raise a little lacrosse player myself,” Hick said.

Hick was an assistant coach on the 2015 Foothill team that won the Southen Section title.  She took over as head coach in 2016. She guided the Knights to a combined 41-25 record and the 2016 and 2017 County championship games during her tenure.  She was also the 2017 Coach of the Year.

Hick will continue to remain active coaching at other other levels.  She and Lauren Ciccomascolo will travel to Long Island at the end of May to coach the Orange County Women’s National Tournament Team.  Hick and Ciccomoscolo will also coach for Aces Lacrosse this summer.

Ciccomoscolo said that the fun-loving Hicks will be missed.

“My favorite memories with her definitely come from the national team-winning our division, t-rexing, playing hot seat with the girls, driving through McDonald’s, and giving Ashley Stokes a driving lesson to name a few. During the season, I would say a lot of memories come from our frequent phone calls,” Ciccomascolo said in an email, adding that she and Hick are both “lax rats.”

Sophia Aragon, Los Alamitos’ coach, said she looks up to Hick as a coach and that Hick was the first one to reach out to her when she first got hired.

“Kate has been a huge support since I came onto the coaching scene last year. She was one of the first coaches to reach out to me and introduce herself, anytime I’ve needed advice or help with anything she has been there, and she included me in everything which helped make me feel comfortable in this new position,” Aragon said in an email.

Mater Dei’s coach Cressita Bowman, who along with her team had to face Hick and Foothill in the county championship in 2016 and 2017, said that Hick did a great job of coaching Foothill and wishes her the best.

Holly Reilly, the coach for St.Margaret’s, respects Hick for being a competitor and that she wanted to win and always challenged her.

“After our game this year, we [St. Margaret’s] beat them [Foothill], it was a tough game for Foothill,” Reilly said. Ashley Stokes was sitting out and many coaches would be frustrated, disappointed and not see the game for what it was.”

Reilly remembers Hick congratulating her after that game and telling her that the Tartans had a really special team.  “That meant a lot to me for her to just take away all the emotion and just see the game for what it was,” Reilly said.