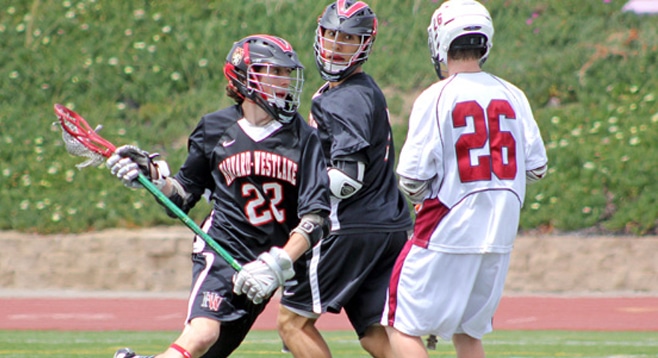 In a season of instant classics, none was better than last Saturday’s rematch between last year’s Southern Section finalists, St. Margaret’s and Harvard-Westlake.

All season long, Orange County’s best lacrosse teams have gone toe to toe with the best from Los Angeles, San Diego, and the Bay Area in games that were not decided until the final whistle blew.

With skill levels and parity across the state at an all-time high this year, we have been entertained by high scoring games, low scoring games, overtime games, comebacks, and cliff hangers. About the only thing missing before Saturday was triple overtime. St. Margaret’s and Harvard-Westlake chalked that one off the list, and when the dust had settled Harvard-Westlake had a measure of revenge in the form of a 10-9 win.

Harvard-Westlake kept the pressure on St. Margaret’s and scored another three goals while Sam Harnisch tallied the only goal for the away team. It seemed as if the LA champs were going to run away with it up 5-2 heading into halftime.

Halftime proved to be the time the Tartans needed to adjust their game plan and refocus on the task at hand. The Tartan’s defense started buckle down in the third quarter, and the offense started find some rhythm. Nick Shanks, Ryan Harnisch, and Patrick Fallon scored a goal apiece in the quarter to keep pace with the Wolverine who scored three of their own.

Building on their third quarter momentum, the Tartans defense got downright stingy in the final 12 minutes. Defensemen Zack Shor and Nick Totah were particularly active. Delgado made seven of his 16 saves in the quarter, and the frustrated Wolverines could only find the back of the net once in the fourth quarter. Meanwhile Cox and S. Harnisch used the extra possessions Delgado was giving them to combine for three to pull the Tartans within one. Shanks sent his teammates into a frenzy when he scored the game tying goal assisted by Cayson Fischer with 22 seconds to play in the game.

Hoping to ride the momentum from Shanks goal to victory, the Tartans fought hard but could not capitalize. Through three nearly full overtime periods, the two teams went back and forth looking to end the game. Then with 25 seconds left in the 60th minute of the play, the Wolverines’ second to last shot of the game ricocheted off the pipe and was collected off the ground for an easy goal in a broken play situation.

Games like this are why we play and in a situation that could have gone either way the Tartans hope to learn from it and build towards playoffs.