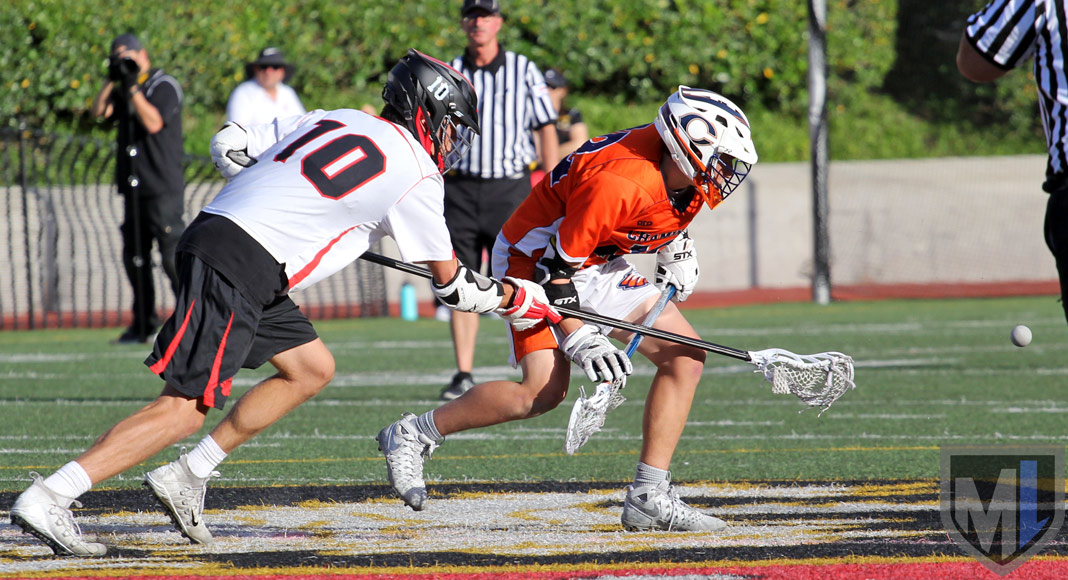 Third-ranked Harvard Westlake scored two goals in the final minute Tuesday, completing a comeback from a three-goal deficit and beating No. 4 Chaminade 11-10 in the semifinals of the Mission League tournament.

The Wolverines (9-6) advance to play top-ranked Loyola on Thursday for the league title. The Cubs (15-4) beat No. 9 Crespi 11-5 in Tuesday’s other semifinal.

A month ago, Harvard Westlake scored in the final minute to force overtime, then beat Chaminade 8-7. Tuesday, they had a deeper hole out of which to climb thanks to a Chaminade defense that smothered the Wolverines in the half-field game.

“Their 6-on-6 defense is great,” Harvard Westlake coach Erik Krum said of the Eagles. “Those six — including their goalie, seven — really, really work hard together. We knew that we needed to push some kind of transition in order to keep them out of their 6v6, and the boys did it really well in the fourth quarter.”

At least five of Harvard Westlake’s 11 goals, including two early in the fourth quarter came in transition or unsettled situations, something the Eagles mostly had prevented for the first 36 minutes with a stifling defense and a ride that prevented quick outlets from Wolverines’ goalie Alex Russell.

Chaminade carried a 9-6 lead into the final period and seemed in control of things at both ends. But as has happened all year, the Eagles could not maintain their level of play for four quarters. In their earlier meeting with the Wolverines, they spotted Harvard Westlake a 6-1 halftime lead before coming alive in the second half and eventually leading 7-6 in the final minute.

Tuesday, the Eagles’ lapsed as the fourth quarter opened. After the game, Eagles’ coach Steve Lane said he thought his team had played well throughout the game but made a few untimely mistakes. Later in the evening, though, he texted MaxLax a revised analysis.

“I thought [initially] we played well throughout the game but just made too many mistakes overall,” Lane said by text. “I was wrong. After rewatching the game, we definitely made too many mistakes, but we only played well for three quarters again. Fourth quarter, we fell apart completely, and it cost us. One more chance to figure this out; no more re-dos from here on out.”

The quarter scores tell the tale: The game was tied 4-4 after one quarter, and Chaminade outscored Harvard Westlake 2-1 in the second and 3-1 in the third to lead 9-6. But the Wolverines won the fourth quarter, outscoring the Eagles 5-1.

Senior Tommy Park started the comeback, scoring off a feed from Paul Rodriguez to make it 9-7 with 11:14 left. Harvard Westlake won the ensuing face-off, and Reid Hudgins promptly hit a cutting Mikey Corrin down the middle on a secondary break to make it 9-8 with 11:02 to play.

Chaminade senior Mac Griffin, who led all scorers with four goals and one assist, restored the Eagles’ two-goal lead at 10-8 with a sweeping right-handed dodge at the 10:32 mark. But Harvard Westlake responded again with early offense off a face-off win, this time with Rodriguez ripping one in to make it 10-9 only 13 seconds after Griffin’s goal.

Both offenses went quiet for the next eight minutes. Included in that stretch were a couple of long Harvard Westlake possessions in which they simply couldn’t find an opening against the Chaminade defense. After a two-plus minute possession ended in a turnover with about two minutes to play, the Eagles appeared poised to run out the clock.

After about 40 seconds, though, a bobbled pass at midfield became a turnover that gave the Wolverines one last chance in the final minute.

“It’s easy to put your head down when you’re down by three and you kind of see the time clock winding away,” Krum said. “They stuck together. We talked about it in the huddle — down a goal with two minutes left? This is what we practice every single day. Just like in football they practice the two-minute drill, same for us, and the boys came out and they committed to it.”

Harvard Westlake came out of the time out with Park and Rodriguez trying a hidden-ball trick at X that drew the defense’s eyes to Rodriguez, allowing Hudgins to cut backdoor and down the crease to take a feed from Park and bury the tying goal with 52 seconds left.

After another face-off win — junior LSM Donovan Econn was credited with 12 wins in 17 draws — Harrison Listen ripped his third goal of the game from the point, giving the Wolverines an 11-10 lead — their first lead since Listen’s second goal early in the second period. In fact, all three of Listen’s goals came with the score tied and gave Harvard Westlake the lead.

The Wolverines now face a rematch with Loyola, which beat them 9-7 two weeks ago. The Cubs present a similar challenge to the Harvard Westlake offense, but with a few more weapons.

“Loyola is another team that plays very strong 6v6 defense,” Krum said, “and they have unbelievable players at both ends. We have to play together the whole game, especially [since we’re] outmanned in numbers on the sidelines, we have to play together and really prevent as many unforced errors and turnovers as we can.”