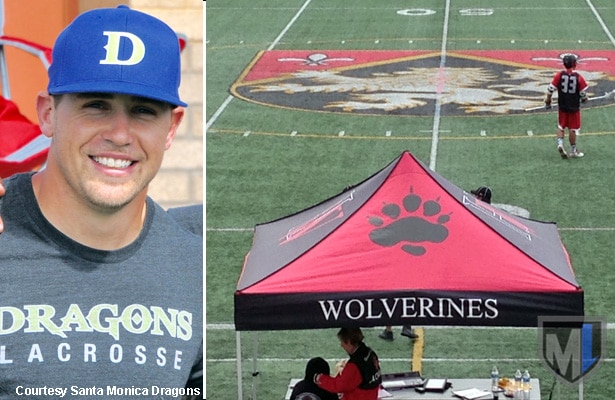 Erik Krum, one of the most decorated lacrosse players to come out of Los Angeles, was named Friday to head the lacrosse program at Harvard Westlake, replacing Alex Weber.

Krum was an All-American attackman at both Mira Costa and NCAA Division III Salisbury — where he helped the Seagulls win three national championships. In 2012, he cofounded the Santa Monica Dragons lacrosse club with 16 players. The Dragons now boast more than 200.

“When the position opened up, it just seemed like the right move,” Krum said Saturday. “Harvard Westlake is a great, great institution.”

Krum got his first taste of high school coaching in 2013 as an assistant at Mira Costa under Andrew Casimir. “High school ball felt great,” he said, “but I really wanted to impact the youth level, to create a good opportunity for kids to start learning early.”

“I want to continue to do youth, but I also want to push high school ball in a new direction,” Krum said “There needs to be a better representation of the high school game in Los Angeles. The Dragons will continue to be there, no matter what. I love youth lacrosse, and I will continue to push it in the right way.”

At Harvard Westlake, Krum inherits a team that went 39-17 in three seasons under Weber, who resigned to devote his full attention to his entertainment career. In 2013, Weber led the Wolverines to the L.A. championship and a berth in the section title game. Last year, they went 11-8, losing in the second round of the playoffs to Westlake. But as Krum pointed out, those eight losses were to some very good teams — twice to Loyola and once to Crespi in Mission League play, plus L.A. champ Palos Verdes, Peninsula, Corona del Mar and section champ St. Margaret’s.

Taking over at Harvard Westlake while also still running the Dragons might mean the end of his professional lacrosse career. Krum spent a season and a half with the Ohio Machine but was released midway through last season.

“I was playing behind three unbelievable players in Marcus Holman, Jimmy Bitter and Steele Stanwick,” Krum said. “That is an unbelievable attack group, so it’s hard to argue. I’d love to keep playing at the highest level, but right now I’m focused on being a full-time youth lacrosse coach and full-time high school coach.”