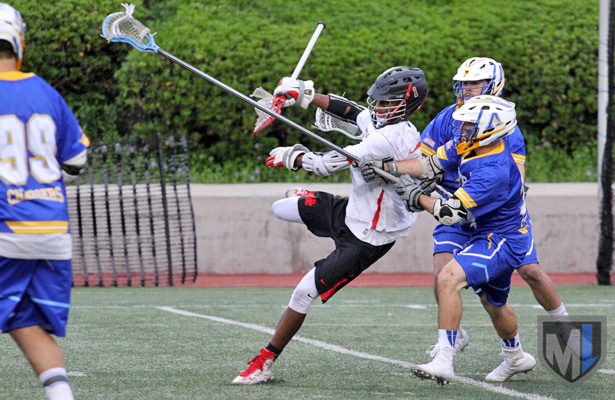 Junior middie Zac Harleston found space up top against Agoura’s man-down defense, caught a skip pass from X and ripped an outside shot for the game-winner with 1:37 left in the third overtime Saturday night, lifting Harvard Westlake to a 6-5 victory.

It was Harleston’s third goal of the game. He scored his second with 2:37 left in regulation to tie the game 5-5 and send it to the extra sessions. That tying goal ended a run of 33 minutes in which the Wolverines, ranked No. 5 in the preseason coaches poll, scored only once after having taken an early 3-0 lead.

Credit both defenses — and both goalies — for keeping the score low and the intensity high. Aggressive stick checks and physical ground-ball play gave the early-season game a playoff atmosphere. Agoura, ranked No. 10 in the coaches poll, was credited with 30 ground balls to Harvard Westlake’s 23.

With active defenses and strong goalie play — junior Troy Hattler was credited with 18 saves, according to the Wolverines’ scorebook, and Agoura senior Jason Pawlak made 14 — scoring was hard to come by.

Goals by freshman Asher Early and Harleston gave the Wolverines a 2-0 lead after one quarter, and senior Philip Thompson scored to make it 3-0 early in the second quarter. But the Chargers battled back with goals from junior Marty Shargel, the first of his three, and sophomore Bradley Roache to pull within 3-2 at halftime.

Early in the third quarter, Shargel scored his second on a feed from junior Noah Miller to tie it 3-3, but Harvard Westlake regained the lead on a goal from sophomore Tommy Park less than a minute later.

Shargel and Miller scored back-to-back early in the fourth to give Agoura its first lead at 5-4, and it stayed that way until Harleston tied it late.