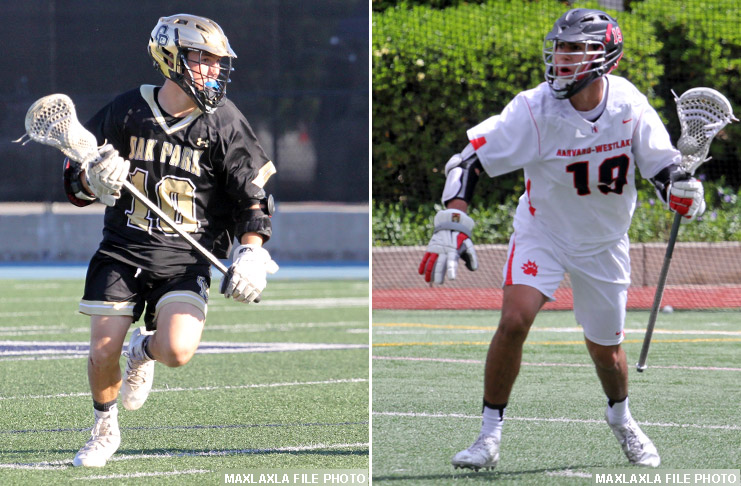 It took No. 1 Harvard Westlake about a quarter to shake off the rust from a 12-day spring break layoff Wednesday, but the Wolverines came alive in the second quarter at Oak Park, scoring four unanswered goals and going on to beat the No. 5 Eagles 11-9 in a nonleague game.

Harvard Westlake remained undefeated at 13-0 on the season. Oak Park (12-4) lost by two goals or less for the third time.

“Oak Park fought very hard and has a well rounded team,” Wolverines coach Erik Krum said via text. “We got into penalty trouble, but it was a high-energy, scrappy game by both teams.”

Eight different Wolverines players scored in the game, including two goals from sophomore attack Asher Early in his return to action after missing considerable time with an injury. All but one of Harvard Westlake’s goals came in the final three quarters.

Oak Park had taken an early 2-0 lead on goals from Max Manyak and Tyler Bradbury in the first six minutes and led 2-1 when the teams changed ends. But the second quarter belonged to Harvard Westlake, which scored four times and took a 5-2 lead into halftime.

The teams traded goals throughout the third period and into the fourth, and the Wolverines’ lead remained three at 10-7 with nine minutes to play.

Oak Park made it interesting, though, getting goals from Adam Julius and Max Bulko midway through the fourth period to pull within one, 10-9. But Harvard Westlake scored an insurance goal with five minutes to play and held off the Eagles the rest of the way.

At least three Harvard Westlake goals were a direct result of Eagles turnovers, according to the play-by-play on the Oak Park Twitter feed (@opeagleslax).

Bradbury (3g, 2a) and Hardy (2g, 1a) led Oak Park’s scoring, and Bulko and Julius each had a goal and an assist. Max Manyak and Cal McCleery each scored once.

Oak Park plays at home against No. 17 Palisades on Friday, then wraps up its regular season Monday at No. 12 Crespi.

Harvard Westlake has a nonleague home game against No. 16 Sierra Canyon on Saturday, then travels to No. 3 Loyola on Tuesday for a game that will decide the Mission League championship. The Wolverines beat the Cubs 13-12 in overtime March 25. Harvard Westlake then finishes its regular season at home against No. 9 Chaminade on April 29.