Harrison’s 3 pts Not Enough as Cannons Win in OT 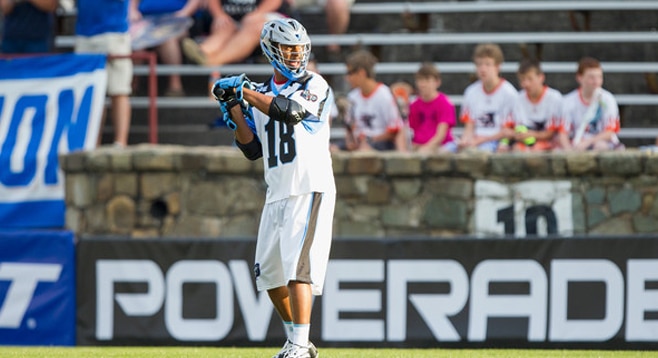 The Boston Cannons defeated the Ohio Machine two minutes into overtime in a shootout that featured nine points by the Cannon’s Paul Rabil and three by JSerra head coach and Machine middie Kyle Harrison. Both teams desperately needed a win to move from a four-way fourth place tie to a three-way third place tie in the League standings as the hunt for a playoff berth begins.

Harrison’s first action came in the opening minutes when he committed an uncharacteristic penalty being sent to the box for a one minute for slashing. Luckily the Cannon’s couldn’t convert. Returning to the field minutes later, Harrison found Logan Schuss to tie the game at two apiece.Schuss returned the favor in third feeding an open Harrison who crowded the net, faked going high corner and slipped it by Boston goalie Brian Phipps’ side. Harrison would then strike again in the third leading a Machine scoring streak that closed the gap to 11-10 Boston at the end of the quarter. Eventually the game went into OT at 16-16. Just two minutes in Will Manny sealed the win for the Cannons with the ultimate goal that came from Rabil for his ninth and final point of the game as the Cannons just barely avoided another single-point loss. Thursday, June 26th, Harrison plays for Team USA in the MLL All-Star game against CdM assistant coach and Team MLL All-Star Jeremy Sieverts. Tune into the CBS Sports Network at 7:30 pm EST to watch the best of the best go head to head!