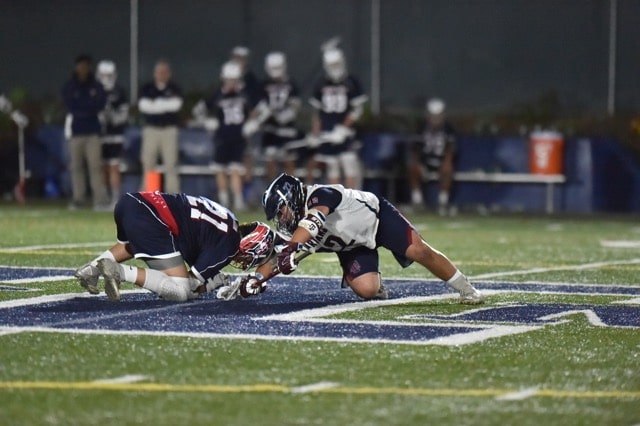 The No. 1 St. Margaret’s boys’ lacrosse found themselves in a spot they aren’t accustomed to at halftime on Thursday – behind in the score.  Entering last night’s game the Tartans had lost only two of their 18 games this season and were undefeated against County competition.  Thus, No. 8 Great Oak, which had lost to the Tartans 18-8 way back in March, was not expected to pose much of a threat to the Tartans.

Yet there was the halftime score: Great Oak 4, St. Margaret’s 3. Thankfully for the Tartans Zane Handy (19 saves on the night) brought his A game and was keeping the Wolfpack for getting too far ahead.

The second half started off where the first half ended.  The Tartans turned the ball over on a couple of fast break attempts and Handy bailed them out both times.

It was not until Conrad Hampson (1g) and Koa Todd (3g, 1a) scored two in a row that St. Margaret’s grabbed their first lead of the night and began to gel. Chris Totah was also heating up at the dot (10/11), and his ability to the keep the Tartans in possession of the ball turned out to be game-changing.

Great Oak temporarily interrupted the flow with a goal, but Kevin Groeninger (4g, 4a) put in two of his four goals before the quarter ended to make it 7-5 Tartans with 12 minutes left to play.

The Tartans were in full control during the fourth quarter. Handy blocked shots, the defense kept the Wolfpack shooting from the perimeter, the offense scored, and Totah rewarded his teammates with more possessions.  The Tartans allowed only two late goals, en route to a 13-7 win.

The Tartans will now put their no. 1 ranking on the line against another team they beat earlier in the season, no. 4 Santa Margarita. Game time is 12:45 at Segerstrom High School.  The winner of that game plays for a County championship.

Great Oak stats were not available at the time of publication.