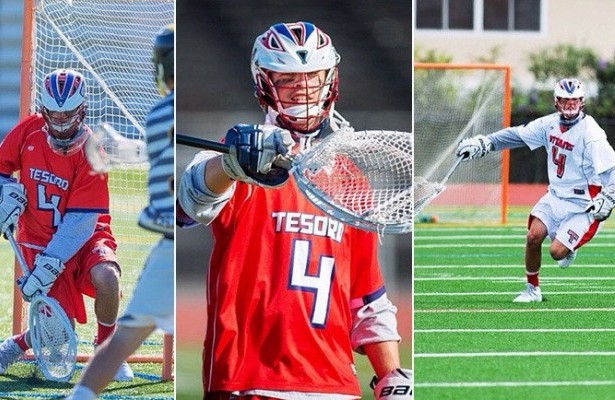 The University of Michigan men’s lacrosse team inked 12 student-athletes as members of the team’s 2015 recruiting class last spring, including Tesoro’s Gunner Garn. The recruiting class is the fourth full class in the team’s varsity history. MGoBlue.com will sit down with each incoming freshman on an individual basis this spring/fall, and Garn was up first.  The following is from the MGoBlue.com article.

First up is goalie Gunner Garn, a shot stopper that hails from Las Flores, California. Garn joins a goalie corp that is quickly turning into one of the strongest units on the team, and he is one of five players on the U-M roster that hails from the Golden State.

On California lacrosse … “California lacrosse is definitely on the rise, compared to other states. The competition is getting there. If you took a handful of the best players where I live, they could compete with the best players on the East Coast, no doubt. The talent drop off is pretty significant once you get past the starters. The youth, I have helped out a lot with the youth out there and trying to aid in the growth as much as I can.”

On his Summer Bridge experience thus far … “It definitely helps in the transition from high school to college. The amount of work is definitely unlike anything I have ever seen before. It is not necessarily harder; it is just a lot more of it than before. Time management is key. Managing your time, getting my work done is a constant priority.”

On what he would consider a successful year … “Being successful for me would just be competing every day. If I can help out any way in the team, whether it’s playing on the field or being second string or third, as long as I’m supporting the team, helping out the boys in any way and making them better, as long as I’m making myself better, I’m fine with it. Academically, I want to come out of the gates firing. I want to have a strong GPA getting out of this bridge program, helping me get into some other schools within the university.”

On his name … “I was born in Germany. Gunner is pretty common out there. My dad’s best friend’s middle name was Gunner, and my mom was also in the Air Force, so all three played a role in my name.”