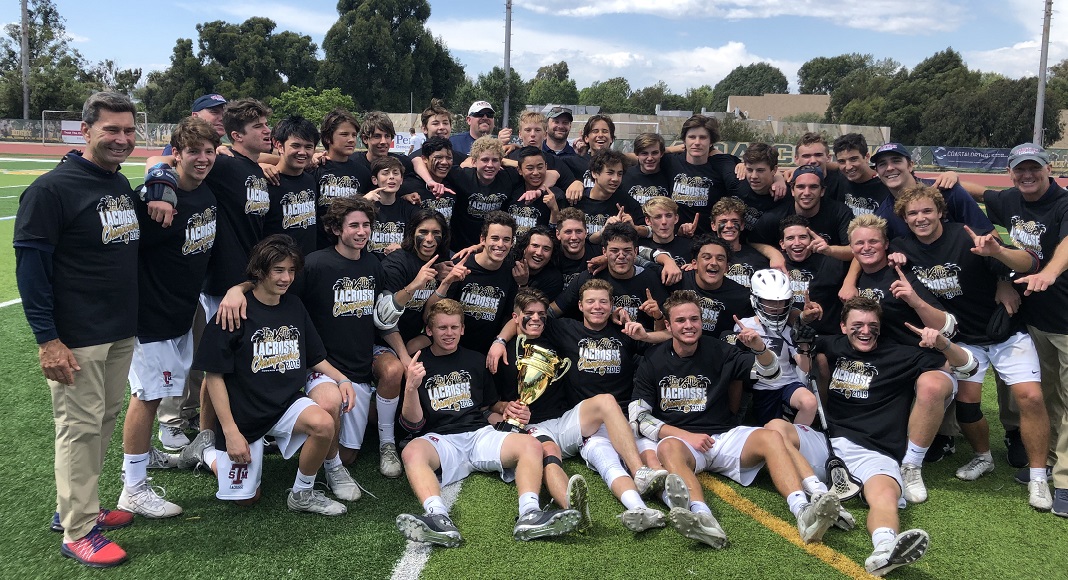 Kevin Groeninger scored four goals and assisted on three others to lead the St.Margaret’s boys lacrosse team a 13-4 win over Loyola and the program’s first Southern Section championship since 2015. Groeninger finished his career with a state-record 411 career  points.

The win not only ended Loyola’s three-year reign as as the Section Champions but also made the Tartans the first school to win boys and girls lacrosse championships in the same year.

The Cubs learned how difficult it is to beat the Tartans when Stu Pollard (17/18 at the dot) is playing keep away and Zane Handy (14 saves) is on top of his game. St. Margaret’s dominated from beginning to end and did not give up a point until the fourth quarter when the outcome was all but decided with the Tartans leading 12-0.

The Tartans jumped out to an early 3-0 lead in the first quarter with goals courtesy of Stephen Deck and two goals from Groeninger and were up 6-0 by halftime.

Sophomore Nate Sanchez (4g, 2a) showed that the Tartans future may look as bright as their present when he opened the second half scoring with back to back goals to put the Tartans up by eight.  The Tartans continued to score until they triggered a running clock with a 12-0 lead late in the third quarter. Loyola got its first goal at the 9:32 mark of the fourth quarter to stop the running clock and added three more late to reach the final score of 12-4.

Koa Todd and John Culley each added two goals for St.Margaret’s while Deck finished with one.

Alex Horowitz, Kaiser Fry, Hunter Ballard and Matt Garvey each had one goal for Loyola (16-8). The Cubs got three saves from goalies Cam Bieler (first half) and Will Parducci (second half).