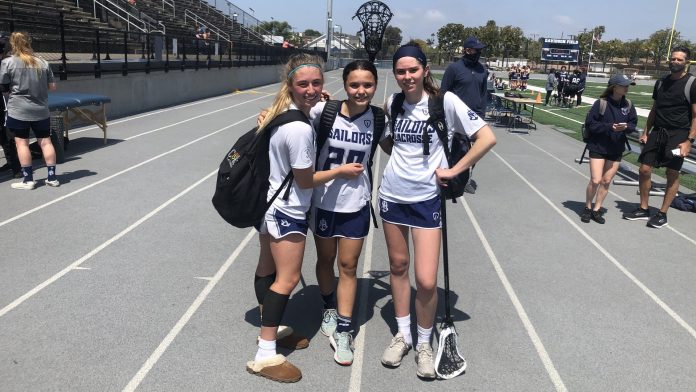 “I think they [Gritmacher and Rothbard] come out strong every game and they help the team get that momentum and the energy that they need to keep going,” Sailors coach Brooke Martini said.

Jill Phillips led the Mustangs with five goals while Kiana Callahan, Bria Connor and KT Boyster each found the back of the net once. Mariah Steen-Ornelas and Natalie Sharrar split time in the goal and combined for seven saves.

Trabuco Hills, fresh off of a big 12-9 South Coast League win on Thursday against Aliso Niguel, had big ambitions of pulling off another big win, as it led 2-0 courtesy of Phillips’ two early goals. The Sailors struggled to find the back of the net, as their shots either were wide or hit the post.

Newport Harbor scored at the 13:19 mark courtesy of Gritzmacher and 26 seconds after, Abraham found the back of the net, tying the game at 2-2. Phillips gave the Mustangs a 3-2 lead, but three straight goals from the Sailors had them leading 6-3, forcing a time out from the visiting team.

Despite losing Farmer for the rest of the game due to accumulating two yellow cards, Newport Harbor sustained a 10-7 halftime lead off of a goal in the last 15 seconds from Rothbard, assisted by Gritzmacher. Rothbard and Gritzmacher assisted on all but one of the Sailors’ goals.

Once the second half began, Newport Harbor began to win the draw controls and clamp down defensively. In addition, Valdes was able to step up her game in the cage for the Sailors.

“I think in the second half, we came out as a team and we didn’t come out asleep in the first half,” Martini said

During the last play of the game, Phillips took the ball up the field and scored with three seconds remaining, preventing Trabuco Hills from getting shut out in the second half. Mustangs coach Melanie Page was proud of how Phillips performed and her team’s overall efforts.

“There are several things we learned in this game that we can work on for our next game,” Page said. “Jill is always looking for a shot and always looking to set her team up to find a way to get to goal, so she’s really the driving force to leading our attack, hustling and keeping the morale up.”