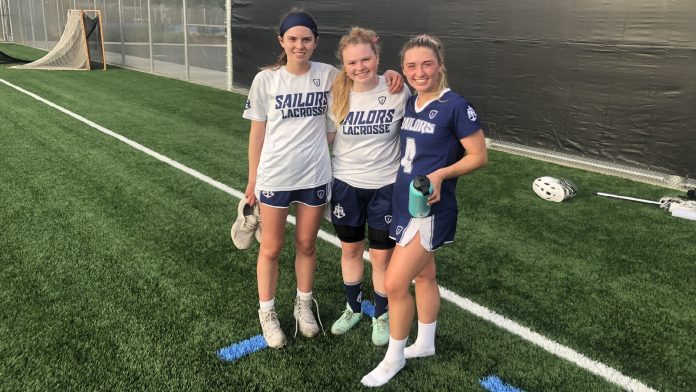 The Sailors also got scoring contributions from Joelle Rothbard (pictured right) who had three goals while Rowdy Farmer had one goal and two assists. Defensively, Lucy Valdes (pictured middle) made seven saves, as she and the Sailors defense shut out the Sea Queens in the second half.

“As we came together, we made adjustments on defense off draw and offensively, we just came out more as a team. When we play as a team, we can beat the team that we’re playing,” Sailors coach Brooke Martini said.

With the second half of league underway, both teams knew going in that Battle of the Bay had more on the line than just bragging rights, it had league championship and playoff implications as well.

“I think when it comes to Sunset League, we know this is our way to playoffs. Everything we do counts toward our seeding playoffs, and that’s what’s helping us mentally to become stronger,” Martini said.

The first half was back and forth, as neither team led by more than two goals for the most part. With CdM leading 2-1, Gritzmacher helped Newport Harbor take the lead at 3-2 at the 20:11 mark. Frankie Garcia tied the game at 3-3 for the Sea Queens almost two minutes later only to have Gritzmacher respond with back-to-back goals to give the Sailors the lead at 5-3 at the 15:32 mark.

CdM eventually tied the game at 5-5 with goals from sisters Belle Grace and Abby Grace past the halfway mark of the half, but Newport Harbor started to take over as Gritzmacher scored at the 9:08 mark to break the tie and a minute later, Rothbard scored off of a missed shot to put her team up 7-5. With the Sailors clinging to a 8-7 lead, Gritzmacher scored off of an assist from Rothbard at the 2:22 mark and Farmer scored with 20 seconds in the half to put them up 10-7 at halftime.

During the halftime intermission, Martini challenged her team n the huddle to shut out CdM in second half like it did the first meeting.

Neither team could find the back of the net in the first six and a half minutes, but Rothbard was able to cut through and score to give Newport Harbor a 11-7 lead. On the ensuing draw, Rothbard won the draw and took it all the way and scored in the span of 10 second to put her team up 12-7 and force a time out from the opposition.

CdM tried to get quality shots, but the shots were either saved by Valdes or the ball was taken away by the Sailors’ defense. Even when the Sea Queens were up a player due to a Newport Harbor player getting a yellow card, they still came up without a goal, much like the previous meeting.

On the defensive end, CdM’s defense was stout, as it put pressure on the Sailors’ ball carriers. Even when the Sea Queens had two players out via yellow card, they held strong, as Ellie Spotts came up with some timely saves to make sure this wasn’t a runaway for Newport Harbor.

“Our girls definitely learned some valuable lessons on offense and on defense. We really did a good job when we had to play man down or two man down,” Sea Queens coach Jessica Murray said.

The Grace sisters combined for five goals for CdM as Belle had three and Abby had two. Garcia chipped in two for the Sea Queens, who got eight saves from Spotts.

“We competed that whole game. I think the score doesn’t let you feel how you competed, but I would say took that down to the last whistle, our girls competed that entire game,” Murray said.