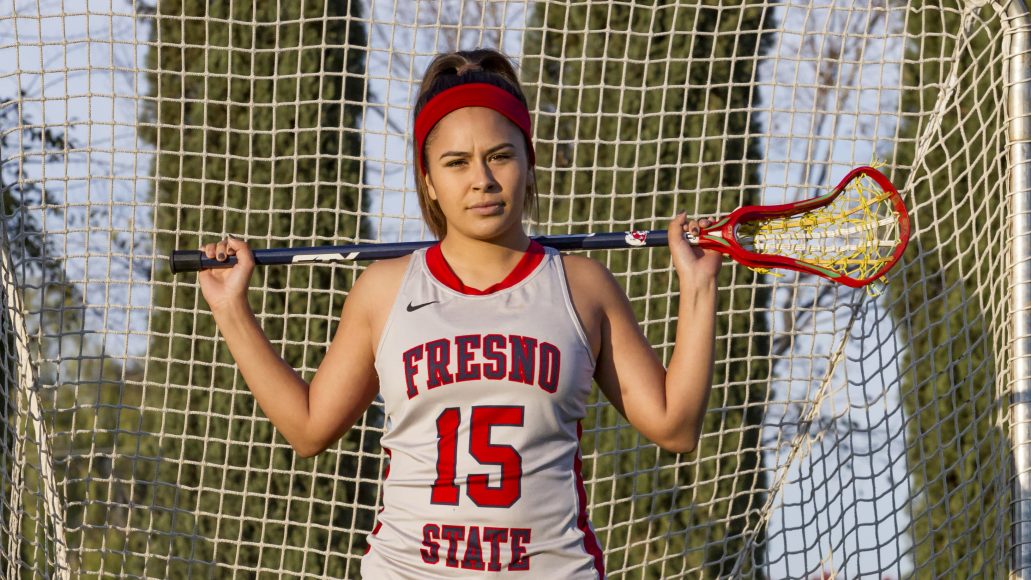 Back home in Seal Beach, Aragon’s high school career included Los Al’s 20-0 record her sophomore year; 2011 and 2012 defensive player of the year, first-team all county, and first-team all league awards; and three CIF championships.  Since moving on to Fresno, Aragon has played in all season games and now starts as a record-setting low defender.  Jason Kelm recently painted the story of Aragon’s lacrosse career in an article for GoBulldogs.com:

FRESNO, Calif. – As the paint dries, it gives the artist time to step back and study her work. The artist notices flaws and imperfections. If the artist could start all over, would she?

In the case of women’s lacrosse senior Sophia Aragon, the flaws are what make the piece special and unique. The imperfections are lessons to be learned from and experiences that mold what’s to come.

“I like that I can have an idea and see it come to life,” Aragon said.

The defender has always been into art and is currently taking an art class at Fresno State that challenges her to try new things and be creative. She also makes her own beaded jewelry. The advertising major in the mass communication and journalism department plans to become a creative director at an advertising firm after graduation.

“I like that advertising gives you structure, but you can also be creative,” she added. “Once I got into it, I knew it was exactly what I wanted to do. I like that I can have an idea and see it come to life.”

As the Southern California native shares her feelings, it becomes easy to see why she’s the Fresno State all-time record-holder in ground balls and is closing in on the record for most caused turnovers. It’s also easy to see how the team captain has helped lead the Bulldogs to their best start in school history.

“I think a lot of defenders are underappreciated because there aren’t many defensive stats,” Aragon said. “You don’t stat a defender for stopping an opponent that’s on a fast break. You could be the best defender out there making slides, covering your teammates, stopping fast opponents, but you don’t get a stat for it and don’t necessarily get recognition. Your team knows it and the other team knows it, but it’s not on the box score.”

She loves the strategies, the movements and the plays. It’s clear that Aragon sees the game of lacrosse as a piece of art. One that she’s been creating for 10 years.

When it’s meant to be, it’s meant to be
When Aragon was 12 years old, she realized she wasn’t very good at softball, but wanted to play a competitive sport. She thought about volleyball and figured her five-foot-one stature would make her a perfect libero. But then she saw a sign for lacrosse. A new team was being created and she wanted to be a part of it.

“I wasn’t very good when I started, but I kept playing and I kept getting better,” Aragon said. “It felt good to be good at something. I started analyzing it at a deeper level. I’ve always been a low defender. I’ve never played another position in my 10 years.”

When she reached high school in Seal Beach, Calif., the lacrosse team was three years old and she knew she wanted to be a part of it. She was awarded the team’s Defensive Player of the Year honor after her junior and senior seasons and her team won California Interscholastic Federation championships in 2010, 2011 and 2012.

By the end of her junior year though, she was emotionally and physically drained, and she decided she wouldn’t pursue a collegiate lacrosse career. However, in the midst of her senior year, she realized she wasn’t quite ready to give up the sport she came to love.

“I saw this fire in her,” Giglio said of Aragon. “She was tenacious. She’s the type of defender that I needed to rein in, rather than make her be aggressive. When looking for a defender, you look for someone who’s helpful, able to slide quickly, think one or two steps ahead and be able to come up with ground balls or cause turnovers. You need someone who’s not afraid to get physical.”

Giglio invited Aragon on an official visit to Fresno State and Aragon fell in love.

“The Valley supports athletics so much,” Aragon said. “The community loves Fresno State. Another big seller was helping grow lacrosse as a sport on the west coast. I was a part of an inaugural team when I was 12 years old, my high school team was only 3 years old when I started playing, and Fresno State was new. It was the perfect place for me.”

For the entire article, visit GoBulldogs.com.