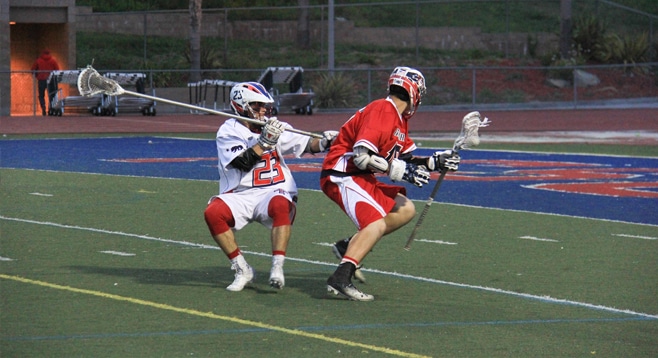 Great Oak and Tesoro were a split decision in this week’s top 10 and both teams looked to show the voters who was right and who was wrong. Great Oak’s varsity program had never beaten Tesoro in its history. The Wolfpack came out strong and put together a complete game to roll to a 12-8 win. With the win, Great Oak improved to 13-2 on the season while Tesoro fell to 8-6.

Great Oak came out of the gates fired up. Weston Gotuzzo, Dakota Campbell, and Adam Utter took advantage of a flat-footed Tesoro defense and scored three quick goals to open up the game just as coach Karl Rohlin drew it up. Each unassisted goal was a clear indicator that Tesoro wasn’t ready for the pace that Great Oak was bringing. Multiple saves by Tesoro’s Gunner Garn and a goal by Sage DeVault kept the game from getting out of hand in the first as Great Oak ended the first quarter up 3-1.

Just as the game seemed to be striking a balance midway through the second quarter, Evan Ognjanac created an opportunity for Hunter Campbell to finish an easy goal on the crease. Great Oak was pedal to the metal for the rest of the game playing aggressive defense in the middle of the field and controlling the ball on offense. After two long possessions Utter scored unassisted in the final minute of the half to give the Wolfpack a 5-1 lead.

The second half saw much of the same patient, controlled lacrosse by Great Oak’s offense that compounded on the Tesoro offensive end. Feeling the panic set in as possessions were limited and time was winding down, Tesoro’s offense rushed shots and Kendall Dizzon was able to make easy saves. Tesoro found a rhythm briefly and scored two in the third by Riley Finn and Matt Castanzo. Great Oak, however, had a third quarter explosion, scoring six consistently throughout the second to build an insurmountable 11-3 lead heading into the fourth.

Tesoro would do its best to close the eight-goal gap by stringing five goals helped by five fourth quarter Garn saves and a few man up chances. With four minutes left and down four it seemed that Tesoro might be able to pull off the comeback of the season. Tesoro couldn’t convert on two man-up situations in a row that killed all comeback momentum and Great Oak came away with their first ever win over Tesoro’s varsity team.

1. Hunter Campbell, Attack, Great Oak: Freshly committed senior Hunter Campbell (North Greenville University, D2) was a big reason for the consistent scoring for Great Oak. He had three goals and one assist for four points but was key in controlling the tempo of the offense.

2. Gunner Garn, Goalie, Tesoro: Garn had 14 saves on the day and was the main reason the game wasn’t out of control earlier and a comeback was possible late. Many of the goals allowed were unsavable.