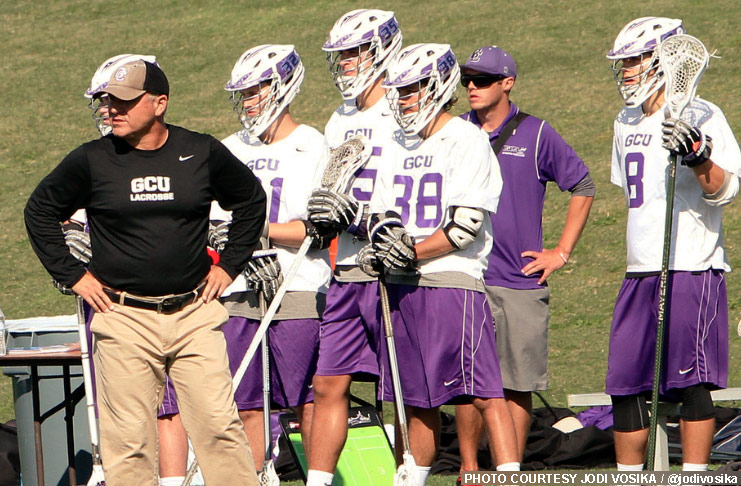 The fifth-ranked Grand Canyon Lopes were sitting by and watching as the Southwestern Lacrosse Conference crumbled around them. Chapman, Arizona State, UC Santa Barbara, Arizona and San Diego State all started the season with multiple losses before Grand Canyon ever took the field. Once the Lopes finally did get in game action, they did not disappoint — sweeping their opening two games against the visiting Colorado schools.

In GCU’s first game Thursday, the Lopes took out No. 2 Colorado in convincing fashion, 14-11. GCU led 11-5 after three quarters. Midfielder Austin Ekeroth and attackman Joe Balestrerie, both seniors and Rancho Bernardo grads, combined for seven points in the win.

Against No. 6 Colorado State on Saturday, the Lopes battled the Rams through a first half that featured four ties and finally taking a two-goal lead at 6-4 late in the third. Cam Wengreniuk scored his fourth of the game with 1:45 to play, and GCU held off a late Rams rally to seal a 7-6 victory. It was a much closer contest, and it ended with a clutch last-minute stop.

The Colorado schools also paid a visit to the No. 14 Arizona State Sun Devils in their tour through the state. For ASU, the action started with a goalie change. Sophomore Johnny Perlite did not see the field against Colorado State. It’s not clear if this was the result of an injury or a coaches’ decision.

Instead, sophomore Cameron Moore (Thousand Oaks) got the nod. Moore saved 13 shots and  allowed only 9 goals, but it wasn’t enough, as ASU took the loss 9-8. A local Orange County product shone for Colorado State, with attackman Blake Warner (Tesoro) scoring four goals in the win.

Saturday, the defense came through again for ASU, as Sun Devils led Colorado 5-0 after one quarter and 8-2 at halftime of an 11-7 victory. Arizona State (2-3) hasn’t allowed an opponent to score in double digits in any of its five games this season.

On Sunday, Chapman fans  finally were able to breathe a sigh of relief: The team snapped its three-game losing streak with a dominant 17-7 win over No. 21 Stanford. It was a much-needed rebound for the Panthers, who improved to 2-3 with a manageable stretch coming up against three unranked opponents.

The struggles for the No. 12 Panthers were on full display against No. 8 Cal, though, only a day earlier. The Golden Bears steamrolled the reigning champs, taking the win 12-5. Cal is now 5-0 and hasn’t allowed more than five goals in a game yet, while scoring at least 12 in every contest.

UNLV is making a strong case to be ranked, following a shocking 8-6 upset win over No. 4 BYU. The Rebels couldn’t keep it going into their matchup with No. 1 Cal Poly, though, as the Mustangs put on a clinic in the 16-9 victory.

The UC Santa Barbara offense finally erupted against Loyola Marymount. The Gauchos ran away with a 15-0 win. Midfielder Eli Suhadolnik (Torrey Pines) had five points in the win, giving him 12 on the season. Casey Mix (Corona del Mar) had three goals and two assists, and Elliott Stanger (Culver City) had two and two.

The SLC Game of the Week broadcast was a matchup between Cal State Long Beach and UC San Diego. In an upset win, Long Beach took out UCSD 11-8 behind three goals and assist from sophomore Cameron Yerzyk (Chaminade) and two goals from Colin Cummins (Foothill). While neither team is nationally ranked, the result will have a direct impact on the SLC South’s seeding for the conference tournament.