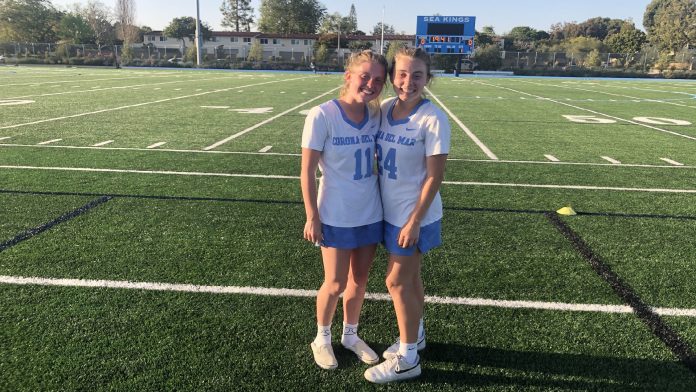 “Belle is one of our captains, she’s just super calm and Abby is the fire. They’re kind of these sisters of calm and fire that work well together, however, they have all of these awesome teammates around them that build them up,” Sea Queens coach Jessica Murray said.

The Wolverines got off to a quick start, scoring the first goal of the game. However, CdM responded with five unanswered goals fueled by applying effective pressure on defense and winning more than their fair share of 50-50 balls. The Sea Queens did not give up another goal until the 3:41 mark when Marley Naegele scored for the Wolverines. Abby Grace dimmed any Wolverine hopes for a comeback by responding 43 seconds later to reach the haltime score of 6-2 in favor of CdM.

The Sea Queens continued its stifling defensive pressure and found success on the draw control, as they shut out the Wolverines in the second half and pulled away for the 12-2 W. CdM won just under 70% of the draw controls on the day.

“I think having Kyle on our staff has really been such an amazing addition for us. I think goalie coaching is such an art form and him playing goalie allows him to coach a goalie,” Murray said of Cord.

Naegele and Ashley You each scored one goal for the Wolverines while Olivia Kilroy and Madison Ross combined for 13 saves. Wednesday’s game marked only the second game for Aliso Niguel, which will be on spring break next week.

“We were struggling with some fundamentals. We didn’t pick up our sticks until about three and a half weeks ago. Mentally for us, we’re still in January, yet we’re heading into league after spring break,” Wolverines coach Dave Elkins said.

Just like the Sea Queens, the Wolverines have a familiar face on their coaching staff, recent Wolverines graduate Taylor Wedlock.

“It’s nice in passing on the tradition and continuity in our program. What we’re hoping is we can develop and do what we do this year and then next year, once we get past some of ‘this stuff,’ we can bring it back together and we can start building again,” Elkins said.

With the win over the Aliso Niguel, the Sea Queens finish March with a 5-0 record. Murray attributes much of the team’s success is the enjoyment they find in playing the game.

“As we all know wins are more fun than losses, but I think to get a win you really have to dig deep and find the fun and why we’re out here. My goal every game is you have to go out there and have fun,” Murray said.