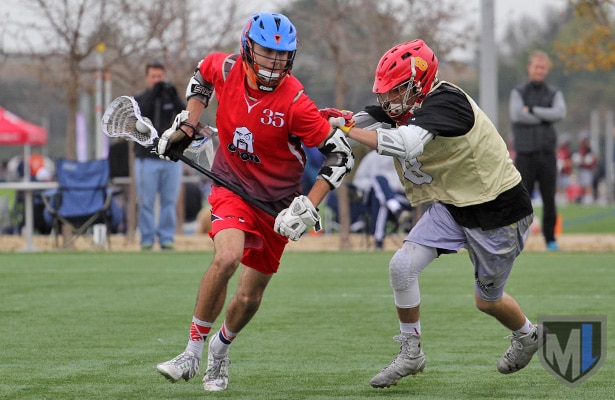 On the final club lacrosse tournament weekend before the start of the high school season, three local clubs took advantage of the opportunity for one last tune-up at the Air Station Shootout at Irvine Great Park.

Goon finished second in it’s pool by virtue of an 8-7 victory over OC Crush on Sunday afternoon. With that win and an 11-4 edge in goal differential, Goon earned second place and Crush third. OC Rebels won the pool at 3-1 — with their only loss coming against Crush.

Check out highlights of the Goon win over Crush, courtesy Big Boom Video. Keep an eye out for a sweet BTB goal from Westlake’s Brett Reilly (wearing a Miami Heat jersey) — blink and you’ll miss it — and a time-and-room, low-to-low rip from up top by Crespi’s Jack Doyle.

Goon’s only loss on the weekend came in the tourney opener Saturday against eventual pool winner OC Rebels, 9-8. Goon also posted an 8-8 tie with Mission (Cathedral Catholic) on Saturday.

The L.A. Cobras beat Black Cat (Peninsula) 9-7 on Saturday and Titans (Tesoro) 8-5 on Sunday to wrap up a 2-2 weekend. As impressive as the wins, though, might have been a 9-8 loss to Victory on Sunday. Representing St. Margaret’s — last spring’s U.S. Lacrosse Southern Section champion — Victory went 3-1 on the weekend with only a 5-3 loss to Stallions (Trabuco Hills) blemishing its record and a plus-20 goal differential.

The brief highlight video of the Cobras-Victory game (above) opens with senior attack Sean Smith (Loyola) getting his own rebound on a man-up play and stuffing it in and closes with Smith using his man as a screen along GLE and ripping an underhand shot past the keeper.

Peninsula struggled to find the net this weekend, scoring only two goals in three of its four games. After opening with an 11-2 loss to Victory on Saturday, though, Black Cat played the Cobras tough, losing 9-7. On Sunday, Black Cat lost 7-2 to Titans (Tesoro) and 9-2 to Stallions (Trabuco).