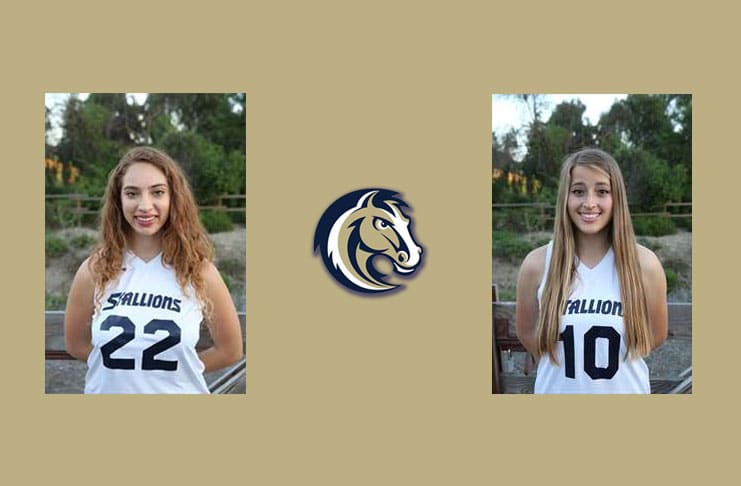 San Juan Hills girls’ lacrosse coach Michael Welter announced that seniors Elena Guillen and Tristan Goldhammer were named captains of 2017 Stallions. Both captains are accomplished student-athletes who were named First-Team Sea View All-League in 2016 and will be Valedictorian at graduations this year. Continue reading to get to know Elena Guillen and Tristan Goldhammer.

COLLEGE: She plans on attending Grand Canyon University to play lacrosse, attain a Bachelor of Arts in Advertising with an Emphasis in Graphic Design, and minor in Worship Arts.

Dreams: She dreams of traveling the world with her sisters. She loves the Spanish language, so she’s focused on visiting Spain and South America first. She also knows how to play FIVE instruments and is working her way up to 15 instruments proficiently by the end of her lifetime.

Other Activities: She loves to play in the band in her church. She’s gotten to travel because of it. She is also very passionate about going on mission trips. She’s gone on two mission trips so far, and is planning on a week-long mission trip in Mexico over Spring Break. She loves her family and friends as well.

Coach’s thoughts: I couldn’t have asked for a better captain in Tristan. She’s compassionate, mentoring, thoughtful, and a great leader. She challenges the girls to be the best version of themselves and to work hard for the betterment of the team. She’s also a great defender and leads by example on the field with her tenacity and tactical strategies.

She will be a Valedictorian at graduation this year as well

Dreams: She would like to own a business and be able to travel throughout her life.

Coach’s thoughts: She is a very driven person and has a nose for the goal. She leads her teammates through thoughtful commentary but with a sense of urgency and importance. Her teammates respect her and want to do well for her.